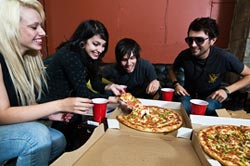 Improvements including menu innovations and ordering technology, combined with flat pricing and marketing/promotion pushes by leading pizza brands, are resulting in modest but improving growth for the industry amid the challenging economy and brutal direct and indirect competition, according to a new market size/forecast report from Mintel.

To remain competitive, chains have kept prices fairly flat: The average pizza price has risen just 1% over the past three years. Restaurants have been making up for this by introducing menu innovations and increasing prices on other menu items, including vegetables (up 13%), desserts (up 12%), pasta (up 11%) and salads.

Salad is the fourth-leading item mentioned on pizza menus, and it has garnered the largest sales increase (10%) during the past three years. In addition to the add-on orders and revenue, salads are helping pizza chains serve patrons seeking more healthful options -- a benefit likely to be of growing importance as chains are required to show calorie counts on their menus, Mintel points out.

Convenient location, price, speed of service and pizza variety are the four most important factors in determining the choice of a particular pizza restaurant, each with more than 80% agreement among Mintel respondents who have purchased pizza from a restaurant in the past month. However, ready-made pizza and/or pizza buffet offerings by restaurants are also attractive to lower-income patrons and those with children in particular.

Pizza’s perception as a “comfort food,” as well as its ability to feed a family/multiple diners at a relatively low cost, have helped buoy the industry through tough times, notes Mintel.

However, major chains’ investments in technology to make ordering and tracking ever more convenient have also played a significant role. For example, Mintel points out, an iPhone and iPad pizza-ordering app launched by Domino’s in June 2011 contributed $1 million in sales within its first month.

Stepped-up marketing, including growing use of online and social media, have also been important drivers.

So what are Americans’ preferences for those billions of pizzas being ordered and consumed?

Crust-wise, thin wins: It’s the preference of 38% of pizza restaurant patrons, according to Mintel. Pan-style and thick crusts are nearly tied for second place (favored by 20% and 19%, respectively).

Pepperoni by far tops in toppings, favored by 67%, followed by mushrooms, sausage and onions (53%, 53% and 41%, respectively). Anchovies, meanwhile, are the choice of just 5% of pizza patrons.