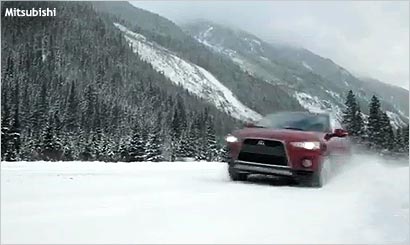 Mitsubishi is on the road again. The Brea, Calif.-based U.S. sales and marketing arm of the Japanese automaker has launched a new marketing campaign that -- like several of its efforts over the past year-and-a-half -- aims to increase consideration of its vehicles by making them stars of cinema verité-style real-world testing.

The automaker's activities over the past year have included a robotic/Internet test-drive program for the Outlander crossover; test drives and challenges that put the Outlander and Outlander Sport in extreme, (and for drivers) even hazardous situations like Bolivia's road of death; and a fleet of Mitsubishi's i Electric car on the streets of the Midwest town in which Mitsubishi assembles the car, and documenting the town's reaction to alternative mobility.

The new campaign, like the previous ones, was developed by LA-based 180LA, which won the Mitsubishi business about a year and seven months ago. This time the documentary-like effort involves all-wheel-drive Outlanders and Lancers on a six-state, five-day storm chase from California to points east. During the filmed expedition the vehicles meet heavy rain and floods, blizzards, snowed-in mountain passes, sleet, and ice.

The "Ride the Storm" chase was filmed in  December, and involved weather geeks from real-time weather tracking site Weather Underground and a member of Mitsubishi’s social media team, who went along for the ride, tweeting and posting their whereabouts.

While the effort features Outlander and Lancer vehicles, the real focus is Mitsubishi's all-wheel technology. Says Grant Holland, creative director at 180LA: "The idea came about from the assignment to highlight Mitsubishi's advanced all-wheel-control in a variety of weather conditions. The strategy was that their all-wheel control is so good, there's no such thing as bad weather anymore. In other words, 'don't be afraid of winter storms,'" he says.

He tells Marketing Daily the motif of the campaign --  and probably the several campaigns the agency has done for the automaker --  is "All about 'doing' and 'proving' in the real world, instead of just 'saying' and 'selling.'"

As in previous efforts, the long-form video documenting the trip lives online, and on social media sites, while 15- and 30-second ads based on the footage are running nationally and in dealer market areas on channels like ESPN, TBS, USA Today. "We have strong buy," says Francine Harsini, Mitsubishi Motors North America's director of marketing.

Harsini tells Marketing Daily that the goal of this and previous campaigns are not so much awareness building but consideration. "Awareness for our brand overall is good. But we want consumers to come to the Web site and experience the brand online, where they can find out more about our products. They may know the name, but when it comes to what we have to offer, we need to focus on that. There is only so much we can do in 30 seconds."

Harsini says last year's winter campaign -- filmed in Alberta, Canada -- in which Outlander Sport crossovers broke five Guiness World Records on a frozen lake bed, performed best, driving the most Web and online shopping actions. But she says the key is making sure all touch points reflect whatever campaigns the automaker is doing at any given time. "Everything we do is about integration. When we launch a campaign, it has to be seamless in terms of core message, product features, and look and feel, whether its images on our Web site, point of purchase materials, or ads."