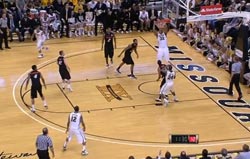 For those who are not already getting Turner Broadcasting's array of cable networks, including TNT and TBS via cable, satellite, and telco providers, consumers will have to pay a $3.99 charge for viewing the games on laptops.

NCAA Games will still be available for free on CBSSports.com. Turner will stream irs games online -- on TBS.com, TNT.tv and truTV.com -- through the TV Everywhere authentication model, where current traditional TV customers can only access the games if they already subscribe to cable, satellite, or telco companies.

Some estimates are that an estimated 85% to 90% of all U.S. TV homes subscribed to one of these types of TV program distributors. About 77 million households will be able to watch the Turner channels for free online under TV Everywhere -- out of the 100 million that get TBS and TNT. Overall, Turner networks are available in around 87% of U.S. TV homes.

CBS and Turner will take separate paths when it comes to non-mobile devices like laptops. Richard Greenfield, media analyst for BTIG Research, believes a $3.99 price tag might be too low -- and that CBS should be participating.

Writing in his blog, he says: “While this is a step in the right direction, we still do not like that CBS is streaming their games for free... We would like to have seen CBS/Turner offer a much higher fee for non-authenticated subscribers ($20 or more) who want the full March Madness on Demand with the authenticated price at $3.99."

He adds: "The concept being, Turner/CBS should want to enhance the value perception of a multichannel video subscription in consumers’ minds and at the same time put extreme pressure on MVPDs [multi-video programming distributors] like Time Warner Cable who are not yet authenticating."

CBS says its advertising dollars dropped with the start of the new NCAA deal with Turner this year -- due to sharing tournament games. But CBS said profitability from running the tournament was now higher.

In 2003, CBS -- which was the lone network to air the NCAA Tournament -- started up March Madness on Demand, requiring a subscription, with a price of $15. In 2006, it converted to a free, ad-supported service -- and grew rapid big online viewership.

Now, the new service will be called March Madness Live. There was also a fee for access to the games on iPhone, which changed to free last year. This year, mobile access will be available on Android phones for the first time.