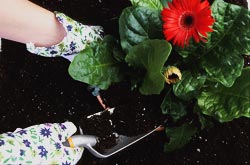 Things are looking up for the Home Depot, which is reporting stronger sales and earnings, as well as a more optimistic outlook for the spring DIY and garden sales.

While the world’s largest home-improvement retailer has been hammered by the seemingly endless softness in the real estate market, its fiscal fourth-quarter sales rose to $16 billion, with comparable-store sales getting a 5.7% bounce. Those stores in the U.S. performed even better, with a 6.1% gain from the same period a year ago.  And net earnings for the Atlanta-based chain rose to $774 million, up from $587 million last year.

It also says it expects comparable-store results in the low single digits in the year ahead, as well as a 4% gain in total sales, and that it will open 11 new stores.

"We had a strong finish to 2011, and with favorable weather, our business delivered results that exceeded our expectations," says CEO Frank Blake, in its release.

For DIY retailers, spring is traditionally the busiest season, between home improvement projects, gardening, and higher real-estate hopes, as potential sellers spruce up their homes before putting them on the market. In another sign of optimism, last month Home Depot announced that it had begun recruiting for 70,000 seasonal positions as it prepares for spring, the company's busiest selling and hiring season.

Talk about needing good news: According to the most recent analysis available from Mintel, the DIY home improvement market suffered a 21% decline between 2005 and 2010. And some 28% of consumers included in the research, conducted last year, say they’d like to take on a renovation or addition to their home, but just don’t have the dough. And among higher-income consumers, 32% of those in the $75,000 to $99,999 earning category say they lacked the cash to do so.

But that doesn’t mean they’re not fans. Mintel also reports that 39% of DIY enthusiasts think home improvements are the best long-term investments they can make.

Lowe’s releases its results next week.