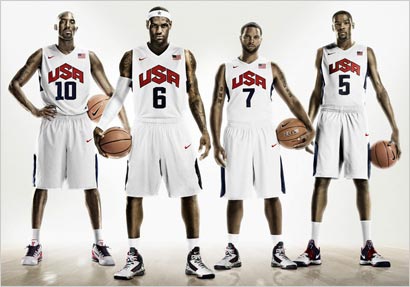 While Nike deserves credit for trying to get as much marketing mileage as it can out of the upcoming Olympics in London, especially given that archrival Adidas has an edge over it as an official Olympic partner, it’s getting a slow start off the blocks. Just hours after unveiling the new men’s basketball uniforms for Team USA, some are pronouncing them “hideous.”

“The uniforms, unveiled Tuesday at a showcase in New York, feature a pyramid-shaped USA logo that has earned derision for looking too angular, too Superman-like and way too ugly,” writes blogger Chris Chase. “That thing is so bad I thought the initial Twitter post announcing it was a hoax.” (In fairness, many of the thousands of comments added to the article were suggestions that Yahoo fire Chase. “Looks fine to me,” commented many of them.)

Love ’em or hate ’em, the Nike Hyper Elite uniforms are the lightest ever, with each using an average of  22 recycled plastic bottles in the polyester fabric. Nike also took the wraps off other innovations, with such athletes as Carl Lewis, Deron Williams (New Jersey Nets and 2008 USAB team), and Carmelita Jeter (the fastest woman on earth) on hand for the show.

Those innovations include Nike Flyknit footwear, with a “featherweight, formfitting and virtually seamless upper,” it says, forming a shoe it says is 19% lighter than the Nike Zoom Streak 3, “worn by first-, second- and third-place athletes in the men’s marathon at the 2011 World Championships.” Also for runners, it debuted the Nike Pro TurboSpeed, “the lightest, fastest track uniform NIKE has ever built, and up to .023 seconds faster over 100m than our previous track uniform.” These speed suits are tested in wind tunnels and are also made of recycled plastic, with an estimated 13 recycled plastic bottles per outfit.

Then there’s the Nike Hyperdunk, available in running, men’s training and women’s training, part of its Lunarlon collection, shoes which will be available to mortals in June.

Meanwhile, the British press is having a little fun with the Nike vs. Adidas battle, with The Telegraph recently reporting that Nike says its contracts with British athletes are binding, although the Adidas agreement requires that they wear Adidas team clothing and shoes, many designed by Stella McCartney, when accepting medals and traipsing around the Olympic Village. Some of the agents of Nike-sponsored athletes told The Telegraph “that their athletes might collect any medals barefoot to avoid breaching their existing footwear contract.” (Olympians can wear whatever brand of footwear they choose while competing.)

In the U.K., Nike is reported to have an 18% share of the sports shoe and apparel market, while Adidas has 15%. And while Adidas’ Olympic affiliation will generate plenty of visibility, Nike has opened a large store in Westfield Stratford City, a humongous new shopping center adjacent to London Olympic Park. An estimated 70% of all ticket holders will pass the Nike store as they enter the games, scheduled to begin July 27.

apparel, olympics, sports
1 comment about "Nike Gets Razzed For Olympic Hoops Look".
Check to receive email when comments are posted.
Next story loading