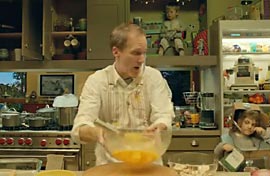 Hyundai, which will soon have three luxury nameplates and is very clearly migrating into the premium side of the U.S. auto market in terms of vehicle styling and appointments, (making room for sibling Kia to grab the more mass-market region), has an appointment of another kind coming up.

The Fountain Valley, Calif.-based U.S. sales arm of the Korean auto company is, for the fourth year in a row, the exclusive automotive sponsor of the Oscars. The company is taking advantage of that with a slate of ads. Two of them are directed by indie auteur Wes Anderson, who helmed offbeat comedies like "Rushmore" and "The Royal Tenenbaums." Anderson brings his odd aesthetic to the Hyundai spots.

The strategy is par for the course for the automaker, which has adhered to what it calls a “Big Voices in Big Places” approach to TV advertising, in which it makes sizable commitments to big-audience events like the Super Bowl, Oscars and other giant-audience television sports and entertainment properties.

The new campaign, via AOR Innocean Worldwide Americas, comprises two pre-Oscar and seven in-show ads with a focus on the Azera sedan. The Azera, which Hyundai introduced at the Los Angeles Auto Show in December and which goes on sale in March, sits in the luxury region between the Genesis sports sedan and coupe and Equus luxury sedan.

One of the Azera spots for the ABC broadcast of the awards show on Feb. 26 involves a flustered dad who tries to make dinner for the family in the midst of a chaotic caricature family of kids in costume creating havoc. In addition to the swarm of kids who are drumming, making disastrous volcanoes with baking soda, and generally destroying things, the wife is shouting cooking directions to him on the phone, because she's supposedly stuck in traffic. Actually, she's relaxing in her Azera, which is parked in the driveway.

Another of the Anderson pre-Oscar ads is a pastiche of recreated clips from movies featuring cars that responded to voice commands. Chitichiti Bang Bang, an underwater car, and a spy car are among them. That ad touts Hyundai's BlueLink telematics platform, making the connection that you can also talk to the Hyundai for directions and make requests of various kinds.

The campaign also has online elements like behind-the-scenes footage of the making of the ads plus several animated billboards for the Azera throughout the show, according to the automaker.