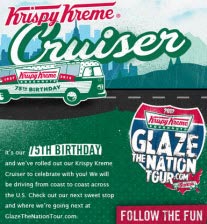 To mark its 75th anniversary and connect face-to-face with consumers across the country, Krispy Kreme has launched a “Glaze the Nation” Tour.

Over the next year, brand ambassadors will make stops from coast to coast in a restored, branded, 1960-vintage Flxible Starliner bus -- a vehicle deemed to have “just the right balance of nostalgia, retro and cool,” according to SVP/CMO Dwayne Chambers.

"Because our purpose is to 'touch and enhance lives through the joy that is Krispy Kreme' we felt it was important to get out of our shops and take the party on the road," Chambers says.

The bus tour is also meant to pay tribute to founder Vernon Rudolph’s use of a small fleet of delivery trucks to build his nascent business in the early 1940’s, and continues to leverage the Winston-Salem, N.C.-based company’s associations with the NASCAR culture. The Krispy Kreme Cruiser is being operated for the brand by Richard Childress Racing, and the tour kicked off in Daytona, Fla. on Feb. 23 with an event featuring appearances by former NASCAR drivers Kyle, Richard and Austin Petty.

The tour will make at least 500 scheduled stops at local fairs and festivals, major events and Krispy Kreme stops in 37 states, as well as “spontaneous” stops. In addition to samples of its Original Glazed doughnuts and other sweets, representatives will engage fans with games, prizes and a variety of giveaways.

The cruiser is outfitted with a geo-navigator so that fans can track its location in real-time. Through a GlazeTheNation.com area on the brand’s site, and promotions and links from the brand’s Facebook and Twitter presences, they can also view photos and videos, read the tour guides’ blog (and get updates through Wordpress), interact with the guides and follow the tour’s Twitter conversation.

Fans are also being encouraged to tag themselves with Cruiser on Foursquare, pin the brand on Pinterest, and follow it on Instagram. Those who register as “friends of Krispy Kreme” can also receive emailed tour updates.

Chambers, a veteran of Fuddrucker’s, Noodles & Co., Red Robin Gourmet Burgers and Sonic Drive-In who became Krispy Kreme’s CMO in September 2010, early on declared his intention to use television and traditional media more selectively and pump up social media -– in part because of its international reach. (In addition to some 230 U.S. stores and 10,000 outlets/drive-throughs in U.S. grocery, convenience and mass-merchant retailers, Krispy Kreme has about 450 stores in more than 20 countries. Most stores are franchised.)

After a huge wave of success and buzz in the early 2000’s, when it went public, Krispy Kreme began to experience financial struggles starting in 2004.

But the QSR has been making a major comeback. In its latest quarter, Q3 FY 2012,  ended in October 2011, Krispy Kreme reported a whopping 95.8% jump in net income (pushing per-share earnings to about seven cents, versus three cents for the year-ago period, according to Zacks), an overall revenue gain of 9.4%, and a same-store sales gain of 4% (marking the twelfth consecutive quarter of same-store gains).