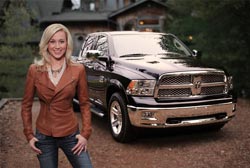 Ram Truck is making a big commitment to country music this year by expanding its relationship with Yahoo around its Ram Country on Yahoo Music channel and launching a separate campaign called “Ram Trucks Road to the Ram Jam.”

The latter is both a digital and grassroots campaign built around national and regional sweepstakes that also happens to put the spotlight on five ascendant country music artists, sequentially, over the course of the year. It culminates in an invitation-only concert featuring all five.

That 2012 Ram Jam concert event will be Dec. 29 in Nashville, Tenn., in a venue that seats about 250. Among attendees will be winners of online and local-market radio-based promotion dangling a trip to two to the Nashville concert.

The program also puts each of the five artists behind the wheel of a 2012 Ram 1500 Laramie Longhorn truck. The trucks, which are leased to each artist for a year, will then be auctioned off in early 2013 with all proceeds going to benefit a military-focused charity of each artist’s choice.

Online, the Ram Jam effort will have video content and music downloads from each of the five artists. Local-market sweepstakes through country radio stations nationwide include prizes like collectible posters and old-school vinyl records.

One of the five artists, Kellie Pickler, is also coincidentally involved in Ram's expanded country music program with Yahoo Pickler will give a Feb. 29 invite-only concert that Yahoo will film for the nascent "Ram Country Live on Yahoo Music," a new video extension of Ram's country channel on the portal, which launches on March 14. All told, Yahoo will film four such private concerts for the Ram's country video channel this year.

Marissa Hunter, head of Ram Truck advertising, tells Marketing Daily that Ram Country on Yahoo Music is a custom platform that essentially aggregates all of Yahoo Music's country news, lifestyle and music content in one place with the Ram name on the marquee. "We wanted to provide something to fans where they could do one-stop shopping for things like news, social media, and music," says Hunter.

"We have a really solid partnership with Yahoo that has allowed us the ability to very innovative, and to create custom programs," says Hunter. She says the automaker has been doing online marketing to drive country fans to the channel. "We have a very aggressive online campaign on Yahoo outside of the Ram Country channel and also outside of Yahoo on lifestyle sites. We are also leveraging social to push traffic to the site and we support it on our own brand Web site as well," she says. "And we have also included Ram Country in traditional advertising and we are also doing a healthy PR campaign around the platform."

Hunter adds that it would be a mistake to compare the channel -- or to characterize it as competing with -- Internet radio platforms. "It's not just music, it's an entire lifestyle experience." In addition to music, video content, news, and lifestyle content, there is also Ram advertising on the Yahoo Ram Country platform, and (new this year) ways for hand raisers to get direct communications from Ram.

The automaker is also involved in the 47th Annual Academy of Country Music Awards at the MGM Grand in Las Vegas this year, both from a media and ground activation standpoint.

"We were excited to expand an established platform like Ram Country on Yahoo Music, where we have seen repeat customers coming back again and again. People spend ten minutes, on average," she says.

There is a point of contact between the Yahoo program and the Ram Jam series, per Hunter, who says the automaker will use the Yahoo channel to add promotional horsepower to efforts like the Ram Jam tour. "This is an opportunity for us to take what we built with Yahoo and leverage it to promote grassroots country music activity. So you will, in time, see the content from Road to the Ram Jam -- including custom video and photography -- migrate into Ram Country on Yahoo."

Meanwhile, the Ram Jam tour has its own marketing campaign, including national and regional radio, print, digital and newspaper. "We have been able to partner with key country music radio across the country in collaboration with the artists we are featuring on the Ram Jam tour, in markets where they have strongest audiences," says Hunter. "We will give the radio stations tools -- including prize packages -- to promote the program."

Hunter says Ram Truck is also doing affinity marketing around equestrian events like the Kentucky Derby, and Churchill Downs; and around outdoor lifestyle with a focus on hunting, camping, fishing and boating. Ram also advertises against college and pro football and around online fantasy football.