And The Winner Is.. Cinema Ads: Brain Research Shows They're More Emotionally Engaging Than TV Spots 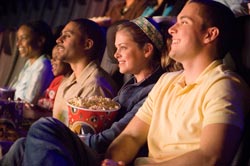 If you’re one of the billion-plus people who watched the Oscars last night, you probably already know how emotionally engaging cinema is. Now there’s some scientific proof. In the first research of its kind, cinema advertising network NCM utilized some state-of-the-art technology that measured the unconscious responses of moviegoers to ads shown to them in movie theaters -- and not surprisingly, they were considerably more engaged than the same type of ads shown on other media such as TV or the Internet.

The findings could be a boon for NCM as it heads into an especially cluttered, pre-upfront advertising marketplace, where hundreds of TV, online video and even place-based video networks are all vying for an emotional connection with their intended audiences: advertisers and agencies.

It’s also the latest in a wave of research from the burgeoning field of neuromarketing research, which many believe could grow to rival -- and maybe even supplant -- conventional forms of media and marketing research. Instead of simply asking people, or measuring their behavior, neuromarketing researchers utilize various biometric methods that tap unconscious physiological responses of people and correlate them with science about the brain to reveal not simply what people are thinking about advertising and media content, but what they are feeling.

“The brand engagement was off the scale,” boasts Doug Pulick, senior vice president of strategic insight and analytics at NCM Media Networks, who has been conducting a series of “dog and pony” shows presenting the findings to some big advertisers and agencies prior to this morning’s release of the findings.

Pulick, a long-time TV researcher before joining NCM, said he has presented more than a dozen of the briefings -- and that in most cases the ad execs were in fact emotionally engaged, and even asked to watch and replay videos of the consumers being measured to better understand their responses, which generated disproportionately higher levels of emotional engagement than equivalent TV ads.

Following exposure in cinema, the “lift in brand resonance” -- the unconscious emotional connection to a brand -- was 75% higher on average than the norms generated by an ad watched on television.

Noting that the content of the ads themselves is a factor in making those emotional connections, Pulick said some of the cinema spots generated levels that were 194% higher than television’s.

Pulick acknowledged that there are other important differences in environment between cinema and TV ads that likely influence their impact on consumers, including the fact that even when they were the same ads, the moviegoers were “captive” viewers, who didn’t have the kinds of distractions and other competing content that viewers watching spots at home on their TV sets might have. But he says that is one of the points of NCM’s pitch: That for whatever reasons -- environmental or otherwise -- cinema advertising has more of an emotional effect than TV ads do.

“My answer to that is, that’s exactly the point. There is a difference between seeing an ad on a 40-foot screen vs. a 42-inch screen,” he said.

The research was conducted by Boston-based Innerscope Research, one of the leaders in the field of neuromarketing research, which has even come up with sophisticated models to explain the correlation between content and the environmental factors influencing how people experience them on different platforms. The research, known as the Brand Immersion model, shows that all things being equal, an immersive environment like someone watching a movie -- or even ads in the pre-show reel preceding one -- are more likely to immerse a consumer in the experience than ads shown in a more “flexible” media environment where they can be more easily distracted.

The fact that cinema performs so well vis a vis TV is significant, because TV, by and large, is also deemed a highly immersive environment -- a fact that has been borne out by the so-called “TV In Context” research that Innerscope conducted for Turner Broadcasting.

Pulick acknowledged that the research is new, and more needs to be done to understand the full effects and differences between advertising in theaters vs. other media. He also acknowledges that consumer behavior is evolving along with consumer media technologies, especially the increasing availability of a “second screen” -- their handheld smartphone or other device -- while they are sitting in what previously would have been a one-screen environment.

Pulick said NCM is already thinking about some research to measure that new behavior, but also doesn’t necessarily believe it will be a net negative for movie advertising. In fact, he said NCM is exploring new mobile apps that would enable consumers to interact with ads, and presumably other content, on their handheld screens while they are watching it on the big screen.

“We’ve had this discussion,” Pulick said, adding: “You can either get on this bus or get out of the way, but you can’t stop it.” Pulick said it’s unlikely that theaters will be able to stop consumers from using their handheld devices while in the theater, so it might be better to utilize them than to ignore or try and fight them.