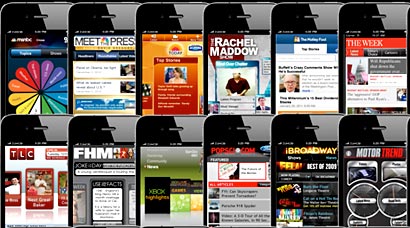 Just because a brand is greatly admired doesn't mean the consumer will have a connection.

Zumobi will launch the Zumobi Brand Integration (ZBi) platform Tuesday to strengthen the love affair between consumers and brands via apps on high-end devices, such as mobile and connected TVs. The platform integrates floating ads and social features into the app, making consumers feel as if the ads represent an image they adore rather than a product that brands want to sell.

The ZBi platform, which integrates into the mobile or device app, eliminates the traditional advertising ad units that typically confine the image within a box. It also allows brands to change the ad on the fly. The placement makes it look as if creative directors designed the page around the ad, integrating the creative piece with other text and images. Popular Science, Corning Glass, Ford, Mercedes, Sprint, Bank of America, Disney and Xbox are among the brands that have been quietly rolling out apps integrated with the service.

While an app doesn't exist for Google TV, John SanGiovanni, Zumobi co-founder and vice president of product design, told MediaPost to expect to see something in the months to come -- along with the Windows 7 operating system Mango.

IHS iSuppli projects that total download revenue from mobile apps will skyrocket. The research firm forecast last year that apps and games would reach $8.3 billion in 2014, up from $5.6 billion in 2012. It estimates Google at about 33 billion app downloads by 2014.

Originally a Microsoft spinoff, Zumobi has been testing the ad-serving and social features for nearly a year. Theplatform, developed to support high-end devices, sports several social features such as the ability to share the ad with friends.

The platform's social elements present the ads in a way that represents the consumer's personality, similar to boards created in Pinterest. When consumers pin the ads to their home screen or a mobile phone, brands can update the image in real-time without the consumer having to repin or delete/change the ad.

Photo UGC capabilities enable brands to develop campaigns that include integration with a user’s camera or photo roll. Special Content Sections can sponsor brands to aggregate app content by topics or interesting event, as well as providing third-party reporting and metrics.