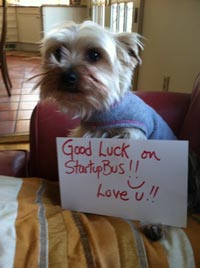 Advertising agencies and companies supporting the online ad space will begin making their way to South by Southwest (SXSW) this week. Alexandra Askot -- art director at MRM Worldwide, a digital advertising agency in Manhattan -- will get there by bus, riding with entrepreneurs.

The StartupBus travels to Austin with about 30 entrepreneurs.

Somewhere in New Jersey en route, Askot told MediaPost each participant stood up in the bus to pitch their company idea. The project will support local businesses by producing one T-shirt and logo per day, along with marketing collateral.

When asked what she learned during the first day's adventure, Askot said "believing in your product really is the key to success. I've seen a lot of teams splitting up because everyone's heart isn't in it. The power of being able to sell your idea, even in the earliest ideation stages, is so  crucial."

Experts will judge the startup ideas based on the market, having a clear understanding of the target and the business opportunity -- whether the product works, why it is a money-making idea, how well it generates traction, and whether the group can generate ads and customers by pitch time. The winning team gets $10,000, and the group as a team decides what to do with the earnings.

Elias Bizannes founded StartupBus to bring together entrepreneurs from around the world, starting in Europe. He is also a venture capitalist at Charles River.

MRM isn't the only ad agency jumping on the SXSW tour. Avenue A Razorfish, GSD&M, WPP Group, Dentsu, Havas, DraftFCB, Ogilvy, Saatchi & Saatchi are also on board. There are more than 50 sessions directly related to advertising, another 50 on social and search marketing. The sessions -- which begin on March 9, part of SXSW Interactive -- run the gamut.

Google and Microsoft also have a major presence at SXSW. Google will have more than 25 panelists at the conference. The company brings a "taste of the Googleplex" to Austin starting Friday with a fireside chat, where Google SVP Vic Gundotra will discuss the future of the Google+ project with Guy Kawasaki.

Rackspace Startup Liaison Officer Robert Scoble, traveling from San Francisco, said mostly engineers are on board with him. "I'm learning about the decisions people have to make when starting a company," he said.

As a startup liaison, Scoble helps small teams adopt cloud computing technology. Along with Microsoft, AT&T and others, Rackspace sponsored the StartupBus event.