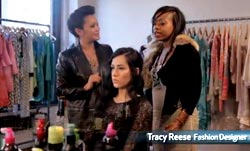 Although an established campaign strategy, marketers continue to push the limits of the video series in terms of budget, scale, and star power.

Take TRESemmé, which is hoping to engage women with an inside look into Mercedes-Benz Fashion Week. While a video or two might have sufficed, the Unilever brand splurged on an eight-month-long program, featuring 32 original episodes, and "Twilight" star Nikki Reed.

“This is the biggest digital push for [TRESemmé],” said David Rubin, brand building director for US Hair at Unilever.

The multi-phased digital series will follow the backstage activity at Fashion Week Fall 2012 through the Spring 2013 show, along with “how-to-videos” featuring TRESemmé stylists.

The campaign -- which can be found at YouTube.com/TRESemme -- also represents the first effort by Alloy Digital since acquiring Generate, a full-service studio and talent management company, earlier this year.

To pull off the effort, Alloy partnered with Mindshare Entertainment, the branded entertainment division of media services agency -- and TRESemmé’s agency of record -- Mindshare.

And for good reason, considering that 195.5 million people will be streaming something online by 2015, according to eMarketer.

The first nine episodes of the TRESemmé Style Setters series will focus exclusively on Fall Fashion Week, as well as Nikki Reed’s personal perspective on the creative process as well as her conversations with stylists and fashion designers.

Along with TRESemmé’s YouTube channel, the campaign will be extended across Alloy’s digital entertainment network through select sites appealing to 18- to-34-year-old consumers.

According to Alloy, its digital network currently reaches more than 70 million consumers each month, with a reach of over 43% of consumers ages 12 to 34.

Still, with such a big budget, why not build a flashy new microsite to feature the series? “The TRESemmé YouTube page is already established as a trusted source,” said Rubin. “By hosting the series on our YouTube page, we can share this content with our loyal following and introduce our vast library of how-to video content to new fans.”

Regarding campaign goals, Rubin stressed that Unilever is seeking more than mere page-views. “The goal for this program is to strengthen the relationship with our consumer,” he said. “We want to generate quality views, not just impressions, and continue to interact with our consumers.”

TRESemmé, according to Rubin, has now been the official hair care sponsor at Mercedes-Benz Fashion Week for eight consecutive seasons.