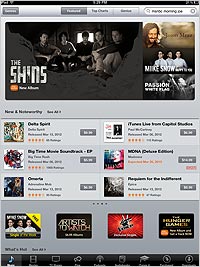 T-Commerce has been one of the new buzzwords around devices in recent months, as early returns show that tablet browsers love to shop and buy from retail sites when in this lean-in/lean-back mode. But lest we forget, tablets are themselves media consumption devices with loads of material to buy and use within the confines of the multimedia touchscreen gadget. And Nielsen’s latest research shows how willing we are to spend on content.

According to the Nielsen Mobile Connected Device Report, music is the content that U.S. tablet owners are most willing to buy, with 62% having purchased downloadable tracks for this device. Not far behind are books -- which 58% of users have bought -- followed by movies (51%).

Magazine publishers that have been scrambling to build digital editions and business models on the tablet are aiming for the right audience. Nielsen finds that 41% of owners have paid for a magazine here. The same number have acquired TV shows. Sports and news content have attracted 22% and 19% to buy, respectively. Interestingly, streaming radio has been bought by more than a quarter of tablet owners.

The U.S. tablet user is, across the board, more willing to pony up cash for content on these devices. Across almost every category, willingness to pay is much higher than among tablet audiences in Italy, the UK and Germany. Most telling, however, is the value placed on premium news content elsewhere. While that category is among the least popular in the U.S. as a paid service, it is the most popular in the other countries. In fact, in Italy 44% of tablet users are paying for news.

As tablet sales proliferate this year, the demographics and buying patterns may evolve as well. In its first two years in the market, the iPad was a premium product that attracted affluent early adopters. With the influx of cheaper tablet entries like the Amazon Kindle Fire and broader adoption of the iPad as its third generation launches tomorrow, that profile will change. IDC estimates that 106 million tablet devices will ship in 2012.