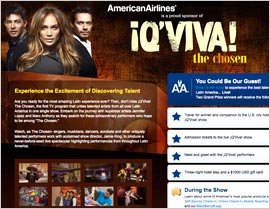 American Airlines, the official airline of the show, Q'VIVA! The Chosen, has teamed up with the show's producers to offer fans a chance to win a trip to attend a live Q'VIVA! performance in the U.S.

Q'VIVA! The Chosen, which premiered on Univision Jan. 28 and on Fox network on March 3, follows superstar artists Jennifer Lopez, Marc Anthony and Jamie King as they travel through Latin America searching for performers who hope to be among "The Chosen."

The singers, musicians, dancers, acrobats and other performers are given the opportunity to travel to Los Angeles for the chance to work with the superstars to produce a spectacular live show highlighting the artists from throughout the region. Filmed in three languages, Q'VIVA! The Chosen is being broadcast in 21 countries.

Consumers can enter for a chance to win the promotion by visiting AA.com/qviva. Two grand prize winners, who will be chosen from qualifying Latin American countries, Puerto Rico and the United States, will each receive tickets for two to attend a live Q'VIVA! show in the U.S. in 2012, and enough American Airlines AAdvantage miles for their round-trip travel. While at the show, they will also have the opportunity to attend a meet-and-greet with show contestants, and will receive a three-night stay in a local hotel plus a $1,000 gift card to use during their trip.