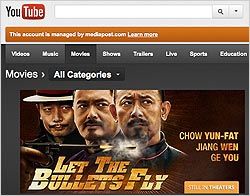 Thanks to YouTube, Google still dominates online video. Video advertising is a different story. Hulu and its premium content now attract the bulk of video ad impressions -- more than 1.5 billion in February alone, according to new data from comScore.

By contrast, Google sites (including YouTube) generated about 1.1 billion video ads during the month.

Ads aside, Google still leads the way with 147.4 million unique viewers in February, followed by Yahoo Sites with 60.9 million; VEVO with 52 million; Facebook.com with 43.6 million; and Viacom Digital with 43.2 million.

Nearly 38 billion video views occurred during the month, with Google Sites generating the highest number at 16.7 billion, followed by Hulu with 951 million and Yahoo Sites with 721 million.

Across the board, 83.8% of the U.S. Internet audience viewed online video in February.