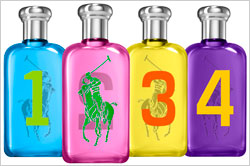 L’Oreal is rolling out Ralph Lauren’s Big Pony Collection for Women in the U.S., using an exclusive song from pop band OneRepublic. Called “Life in Color,” the song is featured in TV ads and a two-minute film, shot by famed fashion photographer Bruce Weber, as well as digital applications supporting the launch.

Like the men’s line of Big Pony fragrances, launched to much fanfare back in 2010, the women’s collection also includes four scents, each linked to a different color.  (Think Power Rangers or Spice Girls, but more expensive and with polo mallets.) The Sporty Fragrance, #1, is packaged in a blue bottle, and is a floral citrus; #2, which is pink, is the Sensual Fragrance, described as a “floriental fruity;” #3, which is yellow, is called the Free-Spirited Fragrance, with pear and mimosa highlights; and #4, which is purple, is the Stylish Fragrance, with wild cherry and purple amber.

The song, which the band will release on an album due out this summer, also plays when women take the Life in Color Quiz, which the company describes as “a digital magazine meets interactive film,” a four-question video quiz to help the customer discover her “Big Pony Fragrance fit.” Using cuts from the two-minute commercial, it also offers a $4,000 Ralph Lauren shopping spree, and can be shared on Facebook, Twitter and email.

The line launches this month exclusively at Bloomingdale’s and Ralph Lauren stores, and then rolls into department stores in April.

Women’s Wear Daily reports that the launch will have an ad budget of up to $20 million this year, including TV and print, also shot by Weber. The trade paper estimates the fragrance quartet is expected to generate $40 million in sales this year.

Priced at $70, the launch comes at a great time for the category: NPD Group, a Port Washington, N.Y.-based market researcher which tracks the prestige beauty industry, says dollar sales of high-end fragrances (those sold in department stores) rose 11% in 2011.