Piaggio Has Designs On The U.S. 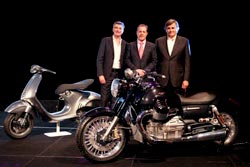 Italian motorcycle and scooter company Piaggio has big plans for the U.S. market. The company has told dealers about its plans to expand its presence in North America, including building something one doesn't usually associate with a motorcycle and scooter manufacturing concern: a West Coast research and development center focused on alternative energy, materials technology and urban mobility.

At its 2012 dealer meeting in Hollywood, Fla. this weekend, Piaggio Group Chairman and CEO Roberto Colaninno, Group Americas president, CEO Miguel Martinez, and executives from the engineering, design, racing and marketing divisions talked up the company’s plans. Piaggio also showed the 300 or so U.S. and Canadian dealers in attendance three new production models, and four prototypes. And Piaggio used the dealer meeting to reveal that it plans to build its International Design Center in Pasadena, Calif.

The new R&D facility will be led by Piaggio Group designer Miguel Galluzzi, who penned the Aprilia RSV4, winner of the 2010 Superbike World Championship and the brand-new Moto Guzzi California 1400, scheduled to go on sale at the end of the year.

Colaninno told the dealers that the research lab in Pasadena is intended to be an advanced urban mobility center. Piaggio’s three-wheeled scoote -- the MP3, which it began selling in 2006 -- and its marketing focus for Vespa around the urban convenience and environmental friendliness of scooters, suggests that the company has been experimenting in this area for a while.

Colaninno said the center "opens a window on the changes that will be taking place in our society, our way of life and in urban and metropolitan mobility models in the next few years.” He added that the center will do partnerships with universities and other research centers around developing new technology.

The design center will also pen the company’s motorcycles and scooters and work on new energy accumulation technology (regenerative braking is one such technology) and aerospace materials. The goal, according to the company, is emission-free engines using alternative energies.

In addition to the Moto Guzzi California 1400, a cruiser, the company showed three other prototype versions of new bikes headed for the U.S.: the Vespa 946, which Piaggio says is a low-emission, low-noise scooter; the Aprilia SRV 850 whose engine is, per Piaggio, the world’s first and only 90-degree V-Twin scooter engine; and the Aprilia Caponord 1200 motorcycle, competing in the currently hot dual-purpose category, which comprises bikes that can handle both off-road terrain and roads.