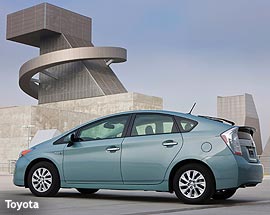 Toyota has gotten past floods, the tsunami, the accelerator incident (and subsequent exoneration by the National Highway Traffic Safety Administration, NASA, the Insurance Institute for Highway Safety and the National Academy of Sciences.) And the brand and its Lexus sibling are garnering good news again from third-party industry observers. What might still be an issue, however, at least from a consumer perception standpoint, is the "r" word.

To be fair, automakers have recalls pretty frequently, as cars and trucks are machines with something like 30,000 parts, if you get down to nuts and bolts. Chevrolet recalled around 4,200 Sonic subcompact cars late last year because they were missing brake-pad elements, and earlier this year GM recalled over 18,000 vehicles in China.

Toyota, however, has what might be called a nagging case. The automaker, having recalled something like 14 million vehicles worldwide in 2009 and 2010 -- more than any other brand in the U.S. -- and coming in second in recalls behind Honda last year, is still hauling ’em in. In early March, just weeks after federal regulators began looking into reports of fires in driver-side doors of a couple of models, the Torrance, Calif.-based Toyota Motor Sales, USA, Inc. announced a recall of 700,000 cars and trucks. Camrys, Venzas, and some older Tacoma pickup trucks have stop-lamp switch and steering wheel cable (in the case of the Tacoma) problems.

This is a major issue for a company that built its church on the rock of durability and quality, per George Cook, a former Ford executive, and marketing professor at the Simon School of Business at the University of Rochester. He says that the very fact that Toyota's reputation is built on quality, fit and finish means that when Toyota orders a recall, it's big news -- fair or not.

"For consumers this may be a 'here we go again' moment. I think consumers are going to start asking how many are too many, and what next?" Cook tells Marketing Daily. He says that Toyota and Honda both have almost cultish customers, but that "it's a foregone conclusion that a quality reputation takes a long time to build, and not much time to destroy."

Cook says the recall is actually good in the sense that it shows the automaker is at least acting faster to deal with potential technical glitches even if the problem is relatively minor. "Eleven million recalled worldwide in the past three years is a lot. When you are in the number-one position with high brand recognition and valuation and the floor falls through, you can't be reactive in addressing recalls. They didn't get the power of the media. This time, they have learned the lesson and are being proactive in going after these issues. These faulty brake lights aren't that serious, but they have learned a lesson, I think.

The problem is that, over time, even the well-meaning media response and proactive recalls become not the solution but the problem. "At what point do American consumers say, 'I'd better take a second look?'" asks Cook. "I think that question is spinning around in their minds now. A recall isn't a positive thing in peoples' minds. It's a negative."