I worked for the New York Daily News for one spectacular year -- 1980-81 -- on the copy desk, surrounded by every kind of character. For a kid from suburban Connecticut in her 20s, this was heady stuff.

Every day, I got to write snappy headlines with puns galore and edit the copy of city-grizzled reporters alongside Hal, a toothless, bearded man of such girth that he took the freight elevator to the seventh floor newsroom. No one wanted to have to use Hal’s computer when he was off because the keys were sticky with the remnants of Chinese takeout. Hal kept a bottle of Galliano in his bottom drawer and topped off his Styrofoam cup with the stuff all evening long. Others parked six-packs on their desks and slaked their nightly thirst.

I and three other young women were hired as copy editors, when the paper decided to put out an ill-fated afternoon edition. For the most part, we didn’t mingle much with the established writers and editors. So it was a wonderful trip down memory lane as I read Paul LaRosa’s Leaving Story Avenue, which has just been published by Park Slope Publishing.

Here the people I watched from afar come to life. City Editor Dick Oliver is “a jaguar of a man” who has been “caged all morning. Now he’s free, and everyone is apprehensive. Where will he pounce, who will he chew up?” And Vinnie Lee, “the 400-pound gentle giant who covers the fire department.” One day Oliver sends Lee to cover the circus and the next day a photo of him standing beside an elephant is captioned: “Elephant (left) and reporter Vincent Lee (right.)”

“This newsroom possesses a raucous atmosphere and I am more than a little intimidated, yes I am,” writes LaRosa, a product of the projects in The Bronx, who is nonetheless mild-mannered and surprised to find himself in the middle of a newsroom, working as a copy boy. “Nobody holds back, and I’m in the same room, a dirty, sweaty foul locker room. It is a cage match.” 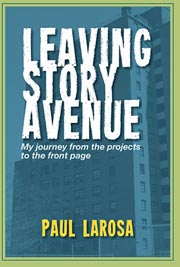 There is more, much more, to this book than amusing foibles and crazy characters. This is also a story about growing up Catholic in the increasingly rough-and-tumble projects of New York, where being mugged is the least of his worries. LaRosa comes of age here, where he sits on a bench outside his building with an assortment of friends and learns about life. Gradually, he finds fewer of his friends on the bench, their families having fled in fear. He gets himself through Fordham and lands the copy boy job, where he finds himself sitting on another bench, waiting for the call.

When LaRosa’s not striving to land a reporting job, he is chauffeuring his parents and siblings on Sunday drives. There is an achingly sweet tale of driving out to JFK because “none of us have ever been to an airport.”

“We stand off to the side so we’re not in the way of these important people who appear to be a different species. It’s hard to shake the feeling that my family and I are immigrants huddled in rags, present in a place we’re not supposed to be.” A flight attendant asks if she can help them find their gate and Paul says, “Uh, no. We’re kind of visiting the airport.” Skeptical, she nevertheless directs him to an area where they can watch the planes take off.

“And so we spend our Sunday afternoon, watching the planes take off and sipping sodas. It’s the best family drive ever, and I’m so happy I have a car and we can go places like this.”