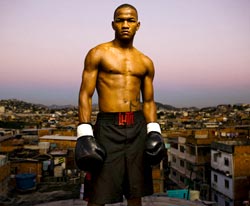 Luta is more than an athletic apparel company. It is the offshoot of a program that a UK-based former boxer launched in the favelas (slums) of Rio de Janeiro to get kids off the streets and out of gangs. Although half the money goes to that program, called Luta Pela Paz ("Fight for Peace" in Portuguese), Luta is by no means a not-for-profit operation.

Luke Dowdney, the ex-fighter who founded and runs "Fight for Peace" and the Luta clothing brand, said at the recent Association of National Advertisers/World Federation of Advertisers Global Marketing Conference that Luta articulates his conviction that "people are increasingly aware that what you buy has an effect on someone else around the world. Before, it was ‘as long as what you buy isn't detrimental,’ that was enough. Now consumers are saying they want what they are buying to make a positive impact. It's one thing to say you are doing something, but you have to do it."

Dowdney talked about what led him to create boxing and mixed martial arts programs in the favela in Rio, where machine gun fire is as frequent as rain, and it is common enough to catch sight of 14 year olds toting assault weapons.

"Nine out of ten gun deaths are outside of war zones," said Dowdney. Where he grew up in the UK might not have been as bad as the hills of Rio, but, as is the case with a lot of kids from hard-scrabble backgrounds, he went into the squared circle to find an outlet and meaning. "Boxing was something I came to in my teens," he said. "I went into boxing and everything changed. And I realized it was also a way for me to have a language I could teach."

The academy uses a five-pillar program -- boxing and martial arts, formal education, social action, home visits and access to jobs -- to help the over 1,000 young people (many of them girls) get mentoring services, learn how to get an education, and jobs. Dowdney said he got help in erecting the Fight for Peace academy from the Brazil branches of KPG, and Deloitte. It opened in 2005 in Complexo da Maré, a clump of over a dozen favelas close to and walled off from Rio's airport and the road that takes oblivious world travelers to and from the more picturesque quarters of the city and the waterfront.

Dowdney later opened a sister academy in London, and has chapters in 136 communities around the world in places like Uganda, the Congo, Lebanon, Costa Rica, and Europe. "We have had 7,000 young people go through a program that started with 10 kids. And we have two national boxing champions in Rio," he said. One of the academy's graduates, Roberto Custódio, is slated to represent Brazil in the 2012 Olympics in London.

That latter point is critical, he said, because the fact that the academy has created a pair of boxing champions gives it credibility. "And if we aren't authentic to kids on the street, they wouldn't come in. If we don't have champs, they won't come."

Several brands have gotten involved. British Airways promotes the organization with a two-minute film passengers see on flights. Credit Suisse, Comic Relief, Petrobras and several foundations also provide funding. But it isn't enough, and Dowdney launched the apparel line to close the gap and create a homegrown revenue stream to help Fight for Peace expand further.  "And we have to raise $3 million just to keep [academy doors] open."

The temptation, he said, was to sell the cause to a global brand for instant cash and total loss of autonomy. "It made more sense for us to do it ourselves, because real strength is based on a real story and comes from a real place."

That's how the Luta (Luta is "fight," or "struggle," in Portuguese) brand was born. Dowdney explained that the brand is not a charity, or glorified donation swag masquerading as a product, but authentic gear designed as a for-profit brand to compete with the likes of Grant, Everlast or Body Armour. The effort to keep the favela roots is evinced by the font, which was done by a Brazilian graffiti artist, and the product portfolio shots, which were taken in the favelas and feature Fight for Peace pugilists and grapplers wearing the Luta apparel.

"Being aspirational is much more effective," he said. "The brand values are performance; that it is inspired by the favela and should be proud of that; and it has a genuine social mission," said Dowdney who added that the product has two ranges: professional training gear and street wear.

The product development process involved in-depth interviews with professional fighters on what they needed in gear (freedom of movement, durability and temperature control) and a partnership with London University to create the product line. The brand started as professional boxing gear -- gloves etc. -- then expanded to athletic training gear, because of the obvious limitations on basing a business on gear solely for fighters. "There are only so many in the world, so we needed to go beyond." Then last year Luta launched a street wear line and a training website, and a social media program focused on Luta as an aspirational brand. Celebrity endorsers have also lined up to appear in the products: the famed Gracie brothers from Brazil, the current, reigning, and apparently heavyweight boxers the Klitschko brothers.

After having launched a retail center in London the brand is now looking at other places including the United Arab Emirates and Spain, said Dowdney. On the corporate side, Dowdney says Unilever, global agency ?WhatIf! and global management consultancy Kurt Salmon have helped support the program. "People will align with a brand if it means something. Authenticity means changing business practices."