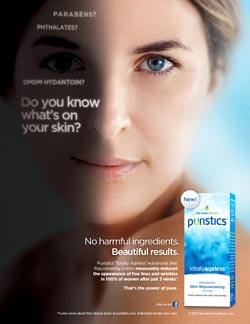 There’s a new player in the mass end of the natural skin-care products line, with Scerene Healthcare Products rolling out its Puristics line in supermarkets and drugstores around the country.

Backed with a campaign that includes TV, print and digital elements, the new line will compete against Unilever’s Simple, and Johnson & Johnson’s Neutrogena Naturals.

It’s a hard-to-define niche, Jordan Rednor, a partner at Protagonist, the brand’s agency, tells Marketing Daily. While there are plenty of organic products -- including Burt’s Bees, owned by Clorox -- at the mass end, there are fewer “natural” brands. “Our target market is women between 35 and 45, and while that can skew either younger or older, she’s looking for products that have no hazardous chemicals, but that also work well. She’s concerned about aging, so efficacy is a big deal.”

The products, while not organic, claim to be naturally derived and non-irritating. The three-year-old brand has been test-marketed in Denver, Raleigh-Durham and Minneapolis, and Scerene, which also markets a line of 100% organic tampons and panty liners, is now rolling it out nationally.

The campaign, themed "the power of pure," includes TV spots on such network programs as “The Today Show,” “The Good Wife,” “NCIS,” and “Dancing with the Stars.”Print ads are running in More, Allure, Redbook, Ladies' Home Journal, and  Self. PR efforts include a blogger outreach.

While Rednor declined to comment on projected sales for the new line -- which includes a rejuvenating lotion, sunscreen, night cream, and eye cream -- he says Scerene plans to spend about $25 million to support the launch.

Market researcher Packaged Facts estimates that the total natural health and beauty market accounts for about $8.5 billion in sales each year, with a compounded annual growth rate of 10% over a six-year period. Within that, natural skincare products are growing at a double-digit rate.