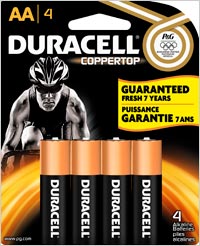 Through a months-long, multimillion-dollar effort, the brand is using all elements of marketing -- particularly packaging, in-store signage and digital social platforms -- to encourage athletes (and the fans cheering them on) to “Rely on Copper to Go for the Gold.”

“We were really inspired by the use of devices in [the Olympic athletes’] training regimens,” Kip Olmstead, marketing director for Duracell, tells Marketing Daily. “It’s such a good fit for Duracell’s equity. The athletes are so strong and committed, and so are we.”

The centerpiece of the company’s marketing tie-in to the games is a “Virtual Stadium” through which fans can learn about what it takes to reach the Olympics and leave messages of support through video, text and photo messages. Those messages can be created in support of specific athletes or sports, or can be crafted in support of Team USA in general. Those who submit messages will have the opportunity to win a trip to the 2014 Winter Olympic Games in Sochi, Russia.

“We’ve discovered people just like making motivational videos,” Olmstead says. “We want to be the conduit for those messages.”

Duracell has also enlisted several athletes (including NBA Star and Olympic medal winner Dwight Howard, swimmer Summer Sanders, triathlete Hunter Kemper and taekwondo competitors Mark and Diana Lopez) to act as ambassadors for the program, helping to get the word out through events, social media and fan engagement.

Duracell has also revamped its packaging, for the first time featuring a person’s image on the package along with messaging about how to support Olympic athletes. Taken cumulatively, the entire program is intended to reinforce Duracell as a brand of power, just like Olympic athletes, Olmstead says.

“We know Americans love the Olympics, and the equity of the power of their athletes fits perfectly with us,” he says. “They Olympians are about powering through tough [circumstances] and that’s how we perceive our brand. We wanted to be about strength and power to accomplish the things you set out to do.”