Infiniti Goes For Acura With JX 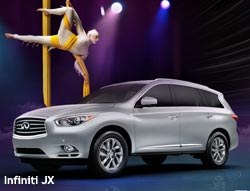 Infiniti is hoping to fill a gap in its product lineup and in the process, give the rough shoulder to Acura's MDX three-row luxury crossover, not to mention Audi Q7, Buick Enclave, Volvo XC 90 and Lincoln MKT.

The fact is that while Infiniti has three premium crossovers -- the EX, FX, and QX -- there's a big gap right where that "and" is. The EX is designed for "personal luxury," the FX is a larger performance-oriented sports crossover, and the QX is a large SUV of the traditional body-on-frame, tow-capable variety. What's missing (until now) is that family-friendly, mom-capable utility that can seat seven people with an easily accessible third row and lots of safety features.

Enter the Infiniti JX, a three-row crossover on sale now, which the company is backing with a big marketing program for young affluent families based on its "Inspired Performance" platform where performance means design, telematics, safety technology, engineering innovation and the total ownership experience.

Infiniti first unveiled sketches of the JX at the New York Auto Show in 2011, brought a concept to the Pebble Beach Concours D'Elegance last year, and launched a microsite around the same time. The company then opened the JX up to reservations during the Los Angeles Auto Show. The site allowed consumers to go online and configure the vehicle and retailers would follow up with them.

"We had expected a lot of people with Infiniti sedans moving up to larger vehicles -- as they have families -- but we also knew we'd get a lot of conquests from Acura and other manufacturers," says Sam Chung, senior manager of Infiniti model line marketing. He says the numbers of pre-orders for a vehicle that consumers had not actually seen -- and would not have a hard time getting once it was in dealerships -- was a salubrious. "We got 2,700 reservations during a three-and-a-half-month period. This is a volume model, not hard to find at dealerships, so it was surprising."

The automaker, which has key partnerships with Red Bull Racing, NCAA and Cirque du Soleil, started talking up the JX during NCAA Men's March Madness recently. Ads, via TBWA/Chiat/Day for the JX, started on Selection Sunday, and will continue to cycle through the entire tournament and through the fall, per Chung.

The campaign focuses on the three critical technologies: the ability of the vehicle's second row to shift forward in a way that makes third-row ingress and egress easy; a first-ever radar and sonar-based backup collision avoidance technology that senses what the driver may not be able to see (say, a vehicle approaching from the side as you back out of a shopping center parking space, or a child walking behind the vehicle) that warns of the impending collision, and if the driver does nothing applies the brakes; and Infiniti Connection, a real person who can be reached either via the in-vehicle telematics platform, by smartphone app, or by dialing a number.

Chung says that while the latter service, which launched last summer, is now complementary for four years in all Infiniti vehicles, Infiniti is promoting it for the first time in the JX because it is the first vehicle in which Infiniti Connection is integrated in the vehicle's own telematics system, rather than being available solely by phone.

The anthem spot shows a young family experiencing the vehicle's virtues with voiceover saying: "In life, we have choices; we can choose to grow up, but not old. To raise families and still follow our dreams."

Chung says the automaker is also promoting JX via its partnership with Montreal-based Cirque Du Soleil, with a program aligned with Infiniti's social media platform. He tells Marketing Daily that the program includes an innovative film to be made by Cirque in Montreal in which the troupe's acrobatic dancers will demonstrate the JX' features in a unique way. The film will be viewable to JX fans on Facebook.

Sean McNamara, Infiniti's product planning manager, says Infiniti built the JX because it saw it wasn't getting families into its large QX. "They were coming into the store saying, 'I have three kids -- what do you have to show me -- I don't want a full-sized utility.' They were basically going down the street to the Acura store for an MDX or to Audi for the Q7," he says.

Infiniti got more insight from an auto ethnography research program that polled the demographic to which it hoped the vehicle would appeal. Infiniti went to affluent families comprising 30- to-40-year-old parents with kids 13 and younger with multiple cars in the household for in-home research and then a home vehicle placement program. Chung says Infiniti gave the families an Acura MDX, Audi Q7, Lincoln MKT, and a Volvo XC 90 to use for three days each. "They kept an audio and video diary where they recorded what worked for them and their lifestyles and what didn't for each car. At the end we brought everyone back together and debriefed them," he says.

Says McNamara of the families: "What you find is the other car tends to be a sports sedan or coupe, so while there's a driver philosophy, we knew we didn't have to go for the fastest 0-60 time and we needed to expand our minds in terms of what we interpreted as inspired performance. It's not just an enthusiast's definition," he says. The company focused on five development areas: luxury interior, something these people expect; space and flexibility; safety because they have children time-saving technology; and fuel economy. "These people actually want fuel economy more than performance and speed," he says. "It's the family vehicle for vacations, so efficiency becomes a much bigger factor."

Because of the panoply of new technology, the automaker started a dealer training program last August, per Chung. "The last thing we wanted to do was launch a Web site that talked about all the great features and have someone go into a dealership and the salesperson looks at them puzzled," he says. " Right now our trainers are visiting every retailer in the country -- two JX's to each team -- and doing active demonstrations for retailers. Immediately following that, retailers can opt in to consumer events. We are also engaging consumers at culinary events."