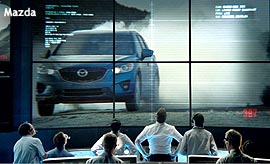 Mazda is launching what it is calling an “inside-out” ad campaign in support of the new 2013 Mazda CX-5 crossover. The effort, which mines the central theme of that ‘70s show "The Six Million Dollar Man," starts on March 28.

In a sense, however, that date is really a pre-launch -- since the new creative for the CX-5 is to be initially directed toward Mazda’s North American employees and key brand influencers, bloggers and the like, who represent the "inside-out" buzz-generating part of the effort. About a week later, the campaign hits the national stage.

The way the buzz part of the campaign works is that insiders get first dibs on the ad. Mazda says that diverse group will be nudged to share the content they have generated on it, broadcasting it from inside the organization out to consumers.

The April 2 rollout of the traditional national campaign hits with television, cinema, print, digital (display, mobile and video) and place-based video in health clubs, airports and other locations designed to reach the active CX-5 target. The idea, per the company, is to create a large presence able to touch the target where they work and play -- not just when they are in front of the TV.

The effort, which is via Mazda's dedicated ad shop The Garage/Team Mazda, features a launch ad in 60-second and 30-second versions that uses "Better. Stronger. Smarter,” a theme line playing off of the TV show’s original banner. Also suggested by the TV show is a ’70s aesthetic, which is not only retro, but probably antique at this point, given that the target consumers were not born when the show was as huge as Farrah Fawcett's hair.

John Abel, Mazda’s director of marketing, explains that while Mazda has a young owner demographic, many of whom may not remember the show, the link to the TV show works because the positioning is around innovative engineering, and Mazda’s SkyActiv powertrain technology in particular. "It implies a breakthrough, a re-imagining of technology. Because we are talking about SkyActiv, we wanted to make that link right up front."

The initial ad also borrows from the TV show's introductory segment, where scientists are shown working to rebuild -- in this case -- the common crossover, "The embodiment of compromise," notes the voiceover. The ad shows a claptrap SUV rolling over the desert as pieces of it fall off and blow up. "We can save it, we have the technology," (cut to a laboratory with the SkyActiv banner) as the VO touts fuel efficiency and performance and engineers in front of banks of dated computer gadgets test the "reborn" CX-5 in the desert.

There will be three follow-up spots examining CX-5 product attributes like the 35-mpg fuel economy (which puts it atop the segment, per Abel), onboard technology and safety. The campaign uses the "We Build Mazdas. What do you drive?" tagline that the automaker introduced a year ago.

Abel adds that the three ads following the launch spot will keep the same theme. "It's a big launch, and we love integration, so we are keen to pick up where we lead off." Abel tells Marketing Daily that the social-media jump start has a track record: the company took that tack when it pre-launched SkyActiv over Super Bowl weekend with a social-media push that he says garnered 2 million views on YouTube, Facebook, enthusiast sites, owners clubs, dealer sites and the like.