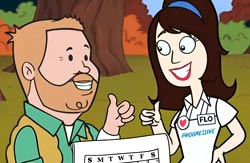 Progressive Insurance is using Flo, the proprietress of the fictive insurance store, to go social about "The Best Day Ever." The campaign involves a series of posts on the character's Facebook and Twitter accounts that examine -- kind of tongue-in-cheek -- ways to have the best possible day, or at least not the worst.

The effort, for which Progressive Insurance partnered with New York-based social-media content publisher and aggregator BuzzFeed, extends an advertisement that Progressive first rolled out last year. The ad has a Progressive store customer -- one Jimmy -- fantasizing about his best day ever: one spent with Flo on an outdoor expedition involving fishing, cooking out, riding ATVs and the like.

Jon Steinberg, president of BuzzFeed, explains that the effort involves several posts by Flo, the leading one being an animated version of the ad. That is followed by nostalgic posts showing characters from the ‘80s with the implication that going back, if only in your mind, will bring ... well, perhaps not Nirvana, but at least enough equanimity to produce a "Best Day Ever." Steinberg says that the look-back makes sense because nostalgia is also inherently buzzworthy. The "Iconic '80s Characters That'll Bring You Back" post has characters like My Little Pony, the ALF alien, Smurfs, and of course, big-hair rock bands and big hair in general.

Another post offers 20 songs that will give you a best day, and the third has 10 ways to have best day ever, a post that also includes spending a day with someone you like (which also features the animated version of the Jimmy/Flo ad) as well as suggestions like swimming in a pool full of puppies, living in a zombie-proof house, and not reading or looking at anything that has anything to do with Snooki. (Which means if you've read this, your day is ruined, as is mine.)

"We created three posts featuring the video to test and optimize the content for sharing," says Steinberg. "The posts are promoted in real-time on the basis of which post is seeing the most social traffic in a given hour." He says the "viral optimization" technology was developed in-house.

Steinberg tells Marketing Daily that the campaign is not to drive retail sales, but awareness and brand equity. "Insurance is not something people purchase on impulse, and so this campaign is designed to engage users on the social Web in conversation and engagement around Flo, the video, and the Progressive brand," he says.

Says Susan Rouser, social media manager at Progressive Insurance: "We’re hoping the [animated Flo and Jimmy] video gives people the same feeling they had on a great day in their life. It might be an afternoon at the park with their kids, or the day they got their first job." She tells Marketing Daily that the nostalgic references are likely to resonate well with Progressive's target audience.

And she says the series of posts on Flo's social sites is part of the company's social media strategy: "To represent the personality of the company while staying true to what we do -- sell insurance. With that said, we understand that not everybody is in the market for insurance right now, so when it comes time for people to shop, we want to be top of mind as the last brand that made them smile."

Rouser says Flo has 3.6 million Facebook fans and almost 8,000 followers on Twitter. "She’s been active in the social space for a few years, and her presence is separate from Progressive’s corporate Facebook and Twitter," she says. "For Best Day Ever, we developed a fully integrated paid and organic campaign to support the video, and our partnership with BuzzFeed was a piece of that."