A Google study that set out to demonstrate the impact of organic search ranking on results for paid-search ads found that on average, 81% of ad impressions and 66% of ad clicks occur even in the absence of organic results on the first page of query results.

Google's research examines how the ranking of an advertiser's organic listings on the search results page affects ad clicks incrementally, through what the search engine calls an Incremental Ad Clicks (IAC) model. It demonstrates a limited opportunity for clicks from organic search.

A study released by Google earlier this year analyzes several hundred paused search ads, revealing how organic clicks -- such as clicks from organic results on the search results page -- did not substitute the majority of clicks from ads on a page when the ad campaigns were turned off. Those findings revealed that 89% of the ad clicks were incremental, on average, and that 89% of the visits to the advertiser's site from ad clicks would not have occurred without the ad campaign.

Although search engine optimization experts may dispute the results, the findings suggest that organic results do not influence clicks on paid-search ads, as some might expect. When analyzing the distribution of ad position and how each varies with respect to organic rank, it turns out that the average ad position is lowest when there are no associated organic results and highest when there are organic search results in the top rank. 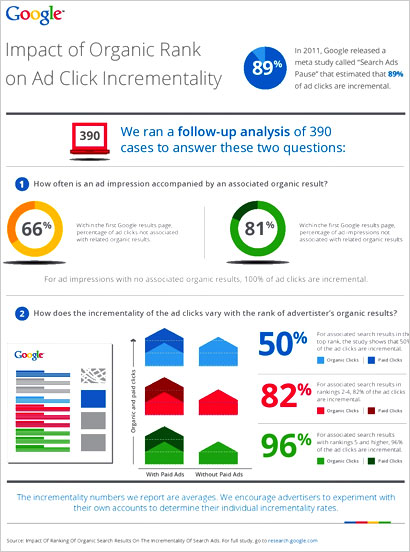