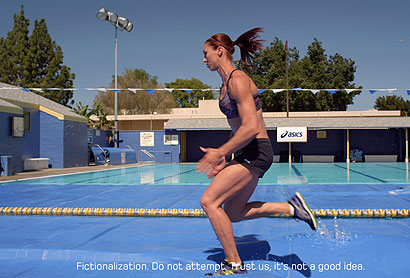 ASICS, which launched its “Stop At Never” campaign during last fall’s ING New York Marathon, is introducing the next phase, a video Web site aimed at bringing younger, less intense runners into the fold.

The Web site will kick off with 10 videos, each demonstrating some aspect of ASICS technology, whether it’s the ability to withstand a jackhammer, play tennis upside down, or to walk on water.

“We’ve always done well with the core runner and marathoners,” Erik Forsell, ASICS’ VP/marketing, tells Marketing Daily. “But in the last six months or so, we’ve really intensified our efforts to reach beyond that. The person may not be logging miles and miles per week, but they still want to get out there and run and stay healthy. And we haven’t really been that in space.”

The video strategy makes sense, he says, because it’s where younger runners spend more time and get most of their product information. It’s also different. “Running is enjoying a big resurgence, and there’s a huge amount of buzz in general about shoe technology, from barefoot running to lightweight shoe technology,” he says. “That’s great, but it also makes it harder to get noticed.”

The videos are a way to break through in a quick, digestible way, “for a person who really isn’t all that interested in hearing about the biomechanics of the foot.” (While viewers won’t see a gorilla throwing suitcases around, they will be impressed by the brand’s “feet for hands” video.)

“That ‘Stop At Never’ theme applies to our design philosophy as well, and that’s what these videos show -- it’s continuing us to push, to innovate and to improve,” he adds. “These videos make that tech story fun.”

Transitioning from an emotional interpretation of “Stop At Never” -- in terms of an individual finishing a marathon and beyond -- to a design theme makes sense now, he says, with the Olympics looming and a greater interest in shoe performance.

The hope, he says, is that it will also broaden the brand’s appeal to the early 20s to mid 30s runner: “These shoes are cooler, and we want to introduce them to our brand.”