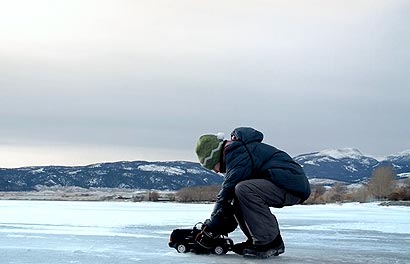 A lot of people regard DieHard as Sears' automotive battery brand. That may be, in part, because of famous '70s-era advertising campaign that showed automobiles start right up even after being left out in the elements for months in freezing weather.

The company is actually harkening back to that creative idea for its first-ever campaign for DieHard alkaline batteries. The move is somewhat paradoxical -- since the campaign, via Y&R Chicago, has the larger purpose of changing consumers’ perception that DieHard is only a car battery brand, and is only sold at Sears.

Like the famous ’70s DieHard ads, the new spot begins with a shot of a frozen lake (in Bozeman, Mont.) One sees the camera pan down to the lake, taking in the distant panorama of the Rockies, and closer up, a single Cadillac Escalade parked on the ice. As billows of snow blow about the vehicle, piling onto the roof, its headlamps snap on and the vehicle starts to drive across the lake bed … until it runs right into a pair of giant human legs. The legs belong to a little, normal-sized boy, and we see that the truck is really a remote-controlled toy. When the boy picks it up and hauls it away, we see that the truck is powered by DieHard batteries.

The campaign begins April 1 on ESPN2 coverage of National Hot Rod Association (NHRA) drag races. DieHard is the the official battery of the association, and DieHard Platinum batteries are used in all racers. The new ad will run on NHRA Full Throttle Drag Racing Series through November supported by print, online and in-store ads.

George Kurkowski, director of the DieHard brand, tells Marketing Daily that the company’s research found that a big chunk of consumers think Sears when they think of DieHard, even though the brand is not far behind Eveready and Duracell in unit sales of alkaline batteries through various retail channels. “Our research shows that 50% of consumers associate DieHard with Sears even though we actually have less affinity to Sears then Kenmore [appliances] and Craftsman [tools].”

He argues, however, that it would be unwise to ignore DieHard’s “tremendous equity in the automotive brand, so we decided to extend that," he says, adding that while it will resonate with consumers 40 and over, since they will likely remember the ads that inspired the new campaign, the company is using a different, digital-focused tactic to appeal to younger consumers.

Specifically, DieHard.com has social media-linked videos that offer a sometimes absurd take on how much abuse the batteries can take. One of the performance-under-extreme-conditions videos has a DieHard battery being shot with an elephant gun. Kurkowski says the company has featured young music stars, rappers and the like in its digital efforts. "We have addressed this younger demographic with hipper campaigns," he says. "But we feel that by advertising alkaline batteries [with the TV creative] we can also create a more emotional connection. The DieHard brand is still number one in unaided awareness. It still resonates."

Indeed, the company has a broadening licensed merchandise program leveraging the DieHard name in apparel, accessories and now a line of flashlights that have a raw metal industrial design aesthetic. "We see this as helping the brand grow faster and reaching consumers from an emotional base.”