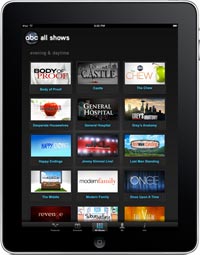 With 55 million different versions of iPads now sold -- and another 3 million new iPads sold in the last few weeks -- the companies say it's important to understand how consumers are using the iPad when watching video.

Nielsen will create a panel by asking 200 people to download a special "meter," which will measure reach, duration, frequency and page views of their iPad apps and Web usage. The opt-in Nielsen iPad panel will aggregate and measure video consumption, app usage and other activity over the course of a year.

The companies believe the study will offer the first view of actual iPad behavior -- as opposed to self-reported data -- along with demographics and other insights.

Cheryl Idell, executive vice president at Nielsen, added: “The insight gleaned from this study, using these metering capabilities, is an example of how we meet our commitment to deliver cross-platform understanding to the industry.”