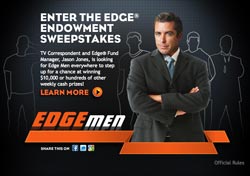 Jones, best known as a correspondent on "The Daily Show," will give away thousands of “micro-grants” to men in need of an Edge.

The program will introduce a group of everyman heroes who will give men the tools they need to get their edge in life, spearheaded by Jones as Edge “Fund Manager.” In partnership with the brand, Jones will dole out Edge Endowments via social media to arm men with whatever they need to achieve success.

Jones will identify people, via social media, who aren't quite as well-endowed as he is, and will distribute cash "micro-grants" to get them ready to do whatever it is they want to do.

Men who want a chance at an endowment are required to tweet at Jones via the @EdgeShaveZone Twitter handle and tell him what they're getting ready for using hashtag #WellEndowed. Then, Jones and a panel of Edge readiness experts will make the call on who is most deserving of an endowment.

This isn’t the first “edgy” campaign the Shelton, Conn.-based company has undertaken. In 2011, Edge helped Anthony Morton go from an unknown student artist in search of gallery space to having his artwork spotlighted on the biggest canvas he had ever worked on, a huge NYC billboard.

Team Edge winner Chad Mendes went from underdog to top contender in the UFC. In 2012, the brand is again looking to give guys an edge -- with a team of Edge Men, including Morton, Mendes and Jones, to help identify guys in need of an endowment.