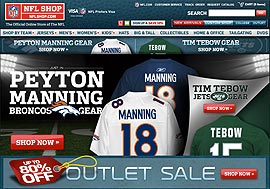 The National Football League is preparing to throw open the doors to its huge pop-up store on Sixth Avenue and 41st Street. The store, the league's first-ever pop-up venue in New York, is timed with the NFL Draft, to be held April 26 just blocks away at Radio City Music Hall.

At the "NFL Shop At Draft" store, which will be open all of April, some 50 licensees will show and sell everything from a line of toasters that emboss slices of bread with the team logo to $500 Anastasia Modo handbags.

Tiffany Bishop, manager of consumer products for the NFL, points out that the first such store was two years ago in New Orleans, a boutique that sold only NFL women's apparel. She tells Marketing Daily that the success of that shop was a reflection of the strong demand for branded products. "There were lines around the block and it was during a heat wave," she says.

Bishop says the NFL will promote the 10,000-square-foot store via social media and local-media advertising, and that the league is mulling doing another one in New York during kickoff week.

The store also spotlights the NFL's new marketing partnerships with Nike and New Era; the brands' products will have the run of a large section of the store that abuts 42nd Street. The store also supports new apparel programs with Nike, New Era, Under Armour, GIII, VF, Outerstuff and '47 Brand.

"We will be doing several fan events at the store, through the month," says Bishop who adds that the upstairs "fan cave" area will host equipment maker Wilson, which installed a football manufacturing facility there where it will make real footballs that consumers can purchase.

"They will essentially be bringing their factory. Fans will be able to sign the inside of the ball and watch it being made." There will also be player appearances through the month and Bishop says the store will change week after week with new merchandise and displays.

Rhiannon Madden, the NFL's director of apparel and consumer products, tells Marketing Daily that the league is putting a bigger focus on licensed products because of unmet demand. "We realized a couple of years ago when we did a segmentation study that while we had a big offering there was a lot more we could do."

The NFL Draft, she explains, is the right place to show off the array of merchandise because the draft is a major draw. "It's on prime time; it's sold out -- it’s becoming much bigger."

Madden also point out that the league is expanding into women's products more aggressively now. The league first advertised women's apparel two years ago and has seen a big take-rate. She says about 20% of sales of NFL products are to women.

Braden Dahl, a representative from the Irvine, Calif.-based New Era, says the store is a big deal for the brand since New Era is now the official cap maker of the NFL, and that the store will have caps for all 32 NFL teams.

NFL commish Roger Goodell and current and former players will do the ribbon-cutting honors on Monday April 2, where the first 500 customers get a commemorative 2012 NFL Draft coin.