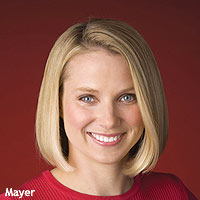 At the MediaPost Search Insider Summit in 2010, college students led by then Ball State University project manager Michelle Prieb redesigned Google into a personal assistant after deciding they wanted the search engine to know how they think and feel before serving up query results. The students said they wanted visual search, and for engines to serve them ideas based on personal information stored in social sites across the Web. Fast-forward two years to 2012, and the students may very well get their wish.

Marissa Mayer, VP of local, maps and localized for Google, said that during the next two decades Google will work on the ability of its search engine to predict and suggest answers to search queries, reports the Huffington Post.

Mayer, speaking during Bloomberg Businessweek's event at the 92nd Street Y in New York City, said: "Can we predict what restaurants you’ll like when you're in a new city? It may not be that you search for pizza, but we know you tend to like pizza places, or you tend to like more casual, loungey bars, so we can suggest things."

At the 2010 MediaPost summit, students also wanted an option to make the search process targeted or exploratory, similar to how Pandora analyzes the composition of songs based on prior music picks. The students wanted search engines to analyze the composition of their virtual identity and serve them recommendations based on that process. And what if search engines could pull from data in social sites, including Twitter, as well as social recommendations from friends? Those descriptions emerged from the summit.

On Thursday, Google published a patent with the U.S. Patent Trademark Office that describes how they might display social search query results within Web search. The patent, filed in December of 2010, doesn’t mention Google Plus, but rather contemplates showing social results from a range of sites that could be considered social, explains SEO by the Sea founder Bill Slawski.

Prieb is back at the Search Insider Summit 2012, by the way. While she moved on from Ball State and now supports accounts at Edelman Digital, she brings with her local Floridian students -– including Brittany Morris -- who will describe their social-search engine of the future. Come join us.

In this 3-minute video, Mayer describes the beginnings of AdSense and how she almost stopped a multimillion-dollar business. She said about 5% of page views daily are searches. So, in a cybercafé, one in 20 screens will have a search page up. That wasn't good enough. The idea to link any text to ads gave birth to AdSense.