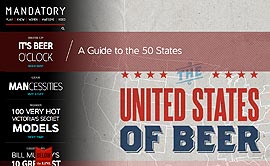 After shuttering Asylum.com in January, AOL is taking another stab at guy-specific content with Mandatory.com.

Created in partnership with digital content developer BermanBraun, the new site represents a fresh start for AOL. “There is no Asylum staff at Mandatory,” said Chris Grosso, GM of AOL.com.

And unlike Asylum, Mandatory was “designed from the ground up for brand advertisers,” he adds.

Beyond a targeted audience, Grosso said the site will offer marketers custom editorial galleries and features specifically designed to align with brand-friendly themes.

So far, Gillette has signed on as the site’s charter sponsor.

On the editorial side, Mandatory will be overseen by Cory Jones, the founding editor of Break Media's HolyTaco.com, and former editorial director of Maxim.com.

The site will rely on a growing staff of bloggers and contract writers tasked with publishing a mix of original and aggregated content.

“Some of [the site’s] content will be aggregated from key partners, but the majority is unique with a higher ratio of original content,” said Grosso. “We will also [link] to stories from relevant sites like HuffPost Comedy and AOL Autos to supplement our coverage.”

Out of the gate, Grosso said he’s betting Mandatory can generate 3.5 million to 4 million unique visitors a month, and then “grow from there.”

Since its inception in 2007, BermanBraun is credited with developing several successful Web properties, including entertainment and celebrity destination Wonderwall -- which it launched in partnership with the MSNBC Digital Network debuted in 2009. Citing comScore data, BermanBraun says Wonderwall currently attracts more than 17 million unique visitors per month.