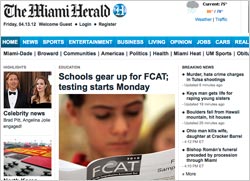 Seeking to expand its digital distribution platform, McClatchy Co. is making all its daily newspapers available in digital format via Kobo, which operates an e-reading service, as well as an eInk-based e-reading device and apps. To promote the new offerings, Kobo customers can sign up for a two-week free trial of any of the newspapers.

The deal covers McClatchy dailies including The Miami Herald, its Spanish-language sister paper El Nuevo Herald, The Sacramento Bee, the Fort Worth Star-Telegram, The Kansas City Star, The Charlotte Observer and The News & Observer.

The McClatchy dailies and other publications are available to Kobo customers through the Kobo newsstand, which allows them access via the eInk-based Kobo Touch eReader, as well as via Kobo apps for the iPad and iPhone. The Kobo Touch automatically stores up to 14 issues of each periodical, removing older issues as new ones are delivered.

The Kobo Touch is just one in a growing number of new tablet-style computers and e-reading devices, which have proliferated following the launch of Apple’s pioneering iPad in 2010.

A recent forecast from Gartner predicts there will be 665 million tablets in use around the world by 2016, with over 45% of those being iPads.