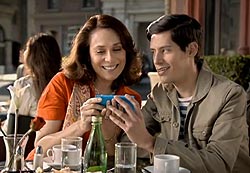 AT&T brings together technology and family for a Mother’s Day-themed advertising campaign targeted at Hispanic consumers.

“Mother’s Day appeals to everyone, but Hispanics are very family oriented,” Roberto Garcia, executive director of Hispanic marketing for AT&T, tells Marketing Daily, adding that Mother’s Day ranks only behind Christmas and Valentine’s Day as top “gift giving” holidays among Hispanics. “We thought this was giving something with an emotional weight.”

The campaign, the Hispanic portion of AT&T’s new “It’s what you do with what we do” general market campaign, features a Mother’s Day-themed commercial in which a teenage boy uses his Nokia Lumia 900 phone to record a performance by Guatemalan singer Ricardo Arjona. The boy later shows that performance (in addition to many of the phone’s other features) to his mother.

The commercial features Arjona’s song, “Mi novia se me esta poniendo vieja,” which Garcia described as an emotionally powerful song that appeals to women of all ages. “For Mother’s Day, I couldn’t think of anything better,” he says. “Our celebrities are part of the daily life of Hispanic Americans in the U.S.”

The commercial, which will be running through the May 13 Mother’s Day promotional period, is an extension of AT&T’s recently unveiled general market campaign. That campaign is meant to show AT&T as not just a service provider, but as a company that provides a platform for people to use technology to their advantage.

“We provide a service, but it’s really our customers that innovate,” Garcia says. “The concept [of the Hispanic campaign] is the same. It’s about how people innovate with our products and services.”