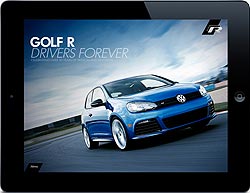 Volkswagen has a new sports car and it isn't wearing an Audi nameplate. The factory-tuned 256 hp Golf R hatch is here, and mercifully, there's no automatic tranny available, which says everything about who this car is meant for: enthusiasts. The car also goes against the grain for the automaker, which has been focused on going mainstream in the U.S. The R is very much for loyalists. They aren't a tiny group. The main non-VW fan site, VWVortex.com, says it gets 120 million hits each month.

To tout the top-of-the-line Golf, which starts at around $33,900, to that core group of fans, the automaker has launched a new iPad app to talk up the vehicle. The Herndon, Va.-based U.S. division of VW is firing up a U.S. promotion “Golf R Ultimate Fan Experience” for the 2012 version of the car, which it is calling its most powerful vehicle ever in the U.S. The program is also a way to get R fans to download the new VW Golf R iPad app, which is the portal for entering the promotion.

Fans of the Golf R, which replaces the R32, get an opportunity to share what they love about the Golf R and describe why they are “the ultimate fan” through the Golf R Drivers Forever iPad app. One winner and a guest gets a seven-day, six-night trip for two to Germany in September. The trip includes a stop at VW global headquarters in Wolfsburg to tour the Autostadt and Volkswagen AG;  a visit to Nürburg to drive the Golf R on the Nürburgring motorsports complex with instruction from professional drivers; a visit to Berlin for an exclusive sightseeing package Luxury hotel accommodations in each city.

The Golf R Drivers Forever app, which is free, has a link to the Sweepstakes, where entrants have to describe in 256 words or less why they want to win. The app also has Golf R videos, photos, footage and interviews about the heritage and performance of the R. Mail-in entries (does anyone still do this?)  are also accepted.

The Golf R will compete with vehicles like the Subaru Impreza WRX STI and Mitsubishi's famed Lancer Evo GSR. For enthusiast motorists looking for the biggest muscle over weight ratio, the two competitors beat the Golf R. But the automaker's U.S. chief, commenting on the vehicle's fan base and the fact that the promotional campaign is focused squarely on R enthusiasts, makes it clear that it's not a numbers-comparison game for shoppers, and there is probably less cross shopping.