STP Is Back With The King 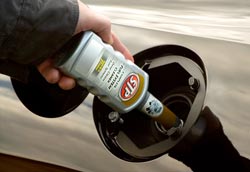 You know your brand is huge if society's fringe elements name a drug after it. Aftermarket fuel additive STP used to be that brand. It was part of our collective unconscious and was ubiquitous in racing: No respectable stock race car or top fuel dragster was without that oval "STP" logo painted somewhere on its nacelle.

Now, after several years of little to no advertising, parent Armored AutoGroup is preparing a campaign to reintroduce the brand. The company is launching a TV, digital, radio and event marketing campaign this week, via the San Francisco office of DDB, which won the account last fall.

The campaign, with a $6 million media budget, stars NASCAR legend Richard Petty's 2010 Dodge Challenger, with a Fight Club-esque message that if you have to ask whether you belong in the left lane ... you don't belong in the left lane. Back in STP's (and Petty's) halcyon days, the driver raced an STP branded Plymouth Road Runner Superbird.

The campaign, promoting STP's "Complete Fuel System Cleaner" and its ability to maximize driving under all conditions, comprises a 30- and 15-second TV spot in which Petty's Challenger zooms down the highway, in the left lane, while slowpokes get out of the car's way. Voiceover is by Mike Cooley, lead singer of Southern rock band Drive-By Truckers. Another version of the spot is going live this weekend with Petty doing voiceover.

The band also does the music for the TV spots. The ads direct viewers to Facebook, where visitors are encouraged to join the “Left Lane Club” and enter a chance to win a Richard Petty-autographed car.

The TV spots will be on ESPN, Fox, Speed, Fuel, Versus, Spike, TNT, CMT and TBS.

There is also a web-based "making of" video about the TV ad. It shows the process of "casting" Richard Petty’s Dodge Challenger, and includes interviews with Richard Petty at his garage in North Carolina, where he talks about his nearly half-century relationship with the STP brand.