Troy-Bilt touts its yard products as made to last a lifetime, so it makes sense to show one family in varying life stages throughout its TV spot.

In an effort to further reach 26- to 49-year-old homeowners and DIYers, Troy-Bilt added the Shazam logo to its commercials, enabling mobile and tablet users to access additional product and song information.

Unfamiliar with Shazam? It’s an app that identifies song titles and artists, allowing viewers watching TV from their tablet or smart phone to “tag” the music in the ad.

Once the song is tagged, users are directed to a Troy-Bilt site that offers product information, a Lowe’s store locator and links to Troy-Bilt’s web site and Facebook page. 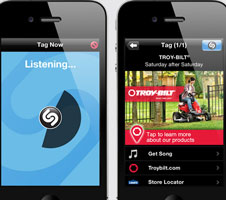 In addition, users can also download the full-length version of the song from the ad -- Tom Luce’s “World Goes By” -- via iTunes.

The ad, seen here, begins with a young man planting a tree. The spot continues on through the years, as the man is now a young husband mowing the lawn, then a young father cutting the grass on a ride-on mower, and ending as an older father whose children now help with the yard work.

“We felt Shazam could be a solution that would allow us to deliver a clear, singular message in the TV spot,” said Jamie Venorsky, associate partner/creative director at Marcus Thomas, Cleveland, the agency behind the campaign. “We reached out to Shazam to study their current user profile. When we overlayed the data, it was a good fit, not just from a demographic perspective, but from a psychographic and technographic perspective, as well.” 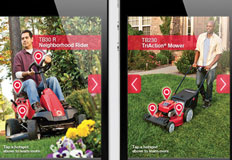 According to Venorsky, the music used was chosen from a small pool of commissioned work. “We and music house DeepMix identified and commissioned three artists to develop original demos for us. The Luce track supported the visual narrative best. From his demo, we developed the full length track, then cut down a 30-second version for the spot.”

The campaign, running through May, is the first time Troy-Bilt has used Shazam in any of its advertising. There are also three different endings to the ad, each showcasing a different product.