Smoothie King: Write Us A Jingle 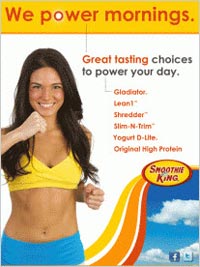 Smoothie King is promoting its functional breakfast smoothies with an integrated “We Power Mornings” campaign that includes a Facebook-based UGC contest encouraging fans to write a jingle.

The breakfast smoothies, with vitamins and minerals, are positioned to help customers make healthy choices for the crucial morning meal, and address specific health goals. They include the Lean 1 (“get lean” drinks containing Lean 1 weight-loss powder and 20-30 grams of protein); the Gladiator (“get strong” drinks with 45 grams of protein); the Slim-n-Trim (“slim down” drinks with 300 calories and potassium); and the Yogurt D-Lite (“get going” drinks that are low-fat, all-natural and include protein).

The “Better Breakfast Beats” contest, being run in partnership with Universal Music Group, invites Facebook users who “like” the brand to write a jingle about how Smoothie King “powers their mornings.”

Participants can submit a video or audio file, or just the words to a jingle. Entries have a chance to be featured in a future radio commercial, and the winner will receive a guitar signed by Universal Music artist Colbie Caillat. All entrants will also receive a product coupon.

The contest is designed as a unique approach to garnering testimonials -– one that combines having fans creatively express how Smoothie King products benefit them and the knowledge that many people also use music as a morning motivator, the brand’s VP, marketing, Bobby Williams, told Nation’s Restaurant News.

Williams also reports that Smoothie King’s highest traffic is between 7 and 9 a.m., and that positioning the chain as a “meal” destination has upped traffic considerably, resulting in a 20% sales jump so far in 2012.

New Orleans-based Smoothie King, privately held and franchise-based, has more than 600 locations operating in 32 U.S. states, the Caymans and the Republic of Korea. Last year, it was ranked #1 in the juice bar category by Entrepreneur magazine (for the 18th year), and #70 overall on the 2011 Franchise 500 list.