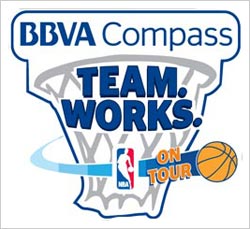 The tour will stop in six markets over two months. Scheduled stops include San Antonio, Scottsdale, Ariz., Birmingham, Ala., Addison, Texas, Denver and Houston. The family-friendly mobile tour features a variety of activities that provide an immersive basketball experience for fans and festival attendees.

New this year, the Larry O'Brien Trophy, awarded each year to the NBA Champions, will be at each tour stop, with the opportunity for fans to take a photo with it.

"Team. Works. on Tour" will feature a full-size basketball court where fans can showcase their skills and participate in a variety of shooting contests and skills challenges such as the Direct Deposit 3-Point Contest, Free Throw Frenzy and Build My Savings Dance-Off.

Fans also can compare their hand size, foot size, height and reach to those of NBA players at the Get-A-Grip, Walk of Fame, Tall and Short, and Arm Span interactive displays. NBA players, legends and coaches will interact with fans, sign autographs and offer basketball tips to future and current NBA hopefuls.

“We’re pleased to be bringing the BBVA Compass NBA Team. Works. on Tour back for a second year,” said Manolo Sánchez, BBVA U.S. country manager and BBVA Compass president and CEO, in a release.“Not only are the activities fun for NBA fans of all ages, they also promote our values of teamwork, effort and fair play.”

NBA Cares and BBVA Compass are also conducting the “Team. Works. In Schools.” Initiative, which aims to revitalize schools throughout the BBVA Compass Sunbelt footprint. Revitalizations are taking place at schools in Houston, Phoenix, Dallas, San Antonio, Denver and Birmingham, Ala.