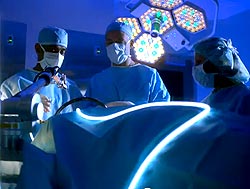 Regardless of how technologically advanced a neurosurgical suite, or how talented the surgeons working the room, if the patient isn't on the table within the "golden hour" after having been stricken with such catastrophic cerebral events as aneurism or stroke, all bets are off.

And until recently, the odds would have been for the house in the southern part of the Garden State -- an area that includes  Burlington, Ocean, Camden, Gloucester, Salem Cumberland and Cape May counties. Until now, the only comprehensive stroke and neurosurgical facility was at Atlantic Care, which is in Atlantic City, and close to nothing but water and slot machines.

But the new Kennedy Neuroscience Center of Southern New Jersey, part of the Jefferson Neuroscience Network, has changed that map for people south of I-195.

The TV spot shows a helicopter setting down at the Kennedy Hospital in Washington Township with a stroke victim who is wheeled into a state-of-the-art neurosurgical suite. There, we see the neuro team doing contrast dye MRI series on the hybrid surgical/diagnostic table using the über futuristic Phillips Allura Xper Bi-Plane 3-D intervention radiology imaging machine. The commercial closes with the message: “This is a life-saver for our community,”and the tag “When moments matter, we’re ready.”

The spot will run during prime time on ABC, CBS, Fox, and NBC on shows like "Biggest Loser," "The Voice," "The Bachelor," and sports programming including the Summer Olympics. On cable the ad will run on A&E, Family, Food Channel, HGTV, Lifetime, TLC, TNT and USA.

The campaign will also have full-page ads and fractionals in local newspapers and magazines, and outdoor billboards at interstate and primary thoroughfare locations.

The hospital says Gloucester County -- home to one Kennedy Health System facility -- and neighboring Salem County have the state’s highest stroke death rates. Previously, over 400 neurosurgery cases a year had to be transferred out of the Kennedy Health System, primarily to Philadelphia hospitals.