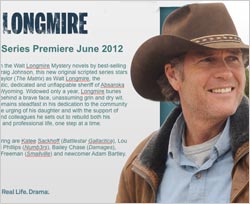 Working with Subway and Big Lots, A&E has been ramping up its efforts to find ways to fuse brands and programming. Much like dating, togetherness rarely develops instantly, and someone playing go-between might help things along.

“Our job is to really find those connections and align the quality and personality of the show with the qualities and personalities of the advertisers, so we’re sort of the matchmaker,” said David DeSocio, senior vice president in ad sales marketing and partnerships at A&E Networks.

The latest multiplatform fusion for A&E involves Chrysler’s Ram trucks and new drama “Longmire,” which airs in June. Driving the link was DeSocio and his team, believing the lead character -– a tough Wyoming sheriff -– might offer some of the qualities Ram is trying to convey.

The show, a contemporary Western, is based on the Walt Longmire mystery novels. Sheriff Longmire grapples with the pain of losing his wife, but soldiers on with his enduring commitment to his community and some help from family and colleagues.

He’s “hard-working, tough, dependable and gutsy” -- qualities that dovetail with the Ram image, DeSocio said. The arrangement was created by Chrysler agency Universal McCann and A&E.

Ram will serve as a top-line sponsor for the season one debut and finale. The vehicle will be integrated into the content with Sheriff Longmire driving it, with contemporaneous efforts to convey core Ram features. Also coming is short-form, branded content linked with the series. The aim is to emphasize partnerships, be it a man and his truck or sheriff and detective.

Online extensions will utilize A&E’s Web site and Facebook and will include gaming opportunities.

Facing the art versus commerce question pervasive in product placement/branded entertainment decisions, DeSocio said: “When it’s the right brand in the right property, it’s additive … they support one another.”

The end-to-end process does involve convincing the artists about the benefits of commerce, which may be getting easier, but remains an uphill challenge. Ad sales teams might call producers with potential deals. If the creative side is on board, it has to “give us scenes and give us integrations [with] that organic feel, so the viewer understands and accepts it,” DeSocio said.

The production and sales sides may have an easier time executing compelling integrations in unscripted series versus “Longmire.”

A&E’s recent work with Subway involved both. The network developed a link between the restaurant chain and drama “Breakout Kings” last year with an original branded spot, while it recently ran two more affiliated with a spinoff of popular reality series “Storage Wars.”

Hershey’s also ran a spot linked with “Breakout Kings,” while Wendy’s did the same with new unscripted series “Shipping Wars,” where the key insight was a link between the show featuring “life on the road” and Wendy’s roadside locations.

With the blend of content and advertising, DeSocio said no matter the genre “when we do our job right, [integrations] are compelling enough that they hold your interest.”