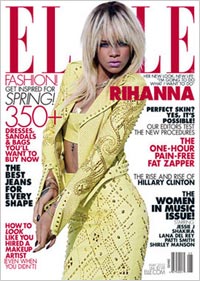 One of the world’s leading fashion magazines is going social: Elle launched a new social commerce initiative on its Facebook fan page, powered by 8thBridge.

The Elle social commerce initiative centers on a curated “trend guide” linking to product pages where items can be purchased.  The trend guide includes a custom tab highlighting six editorially selected trends of the season, with each trend linking to a gallery of related products. Trends include “Sporting Goods,” “Sea World,” “Wanderlust,” “Showgirls,” “Portrait of a Lady” and “Flower Girl.” Elle says the social commerce program will be refreshed with new content throughout the year.

As part of the initiative, Elle is introducing its own, expanded take on the Facebook “Like” button, in the form of new buttons that read “Love,” “Want,” and “Own.” Each time a user engages with the program, a “shoppable story” will be shared via her newsfeed, timeline and ticker.

Out Lays Off Entire Staff, Re-Hires As Freelancers

“Out of the closet and into the streets” took on a new meaning for Out’s editorial staff, which was laid off en masse by Here Media, according to Capital New York. Most of the staff will be hired as freelancers by a new content production company started by editor-in-chief Aaron Hicklin, called Grand Editorial. Out will outsource its editorial responsibilities. As freelancers, the reporters won’t receive benefits, and will work from home, eliminating the need for large offices.

Meredith Corp. has named Jon Werther chief strategy officer, where he will be responsible for helping management develop corporate and business unit strategies and leading key strategic initiatives. Prior to working as a transactional attorney, Werther worked for Time Warner and AOL. From 1999-2005, Werner negotiated a series of strategic partnerships and led initiatives that were part of AOL’s shift to a Web-focused strategy. He then joined Time Warner as vice president for operations. Werther rejoined AOL in 2007 and later was named EVP, integrated operations.

Chris Kevorkian, previously executive vice president for digital at MPA, the Association of Magazine Media, has been named chief marketing and digital officer. He will oversee the work of MPA’s marketing and research departments, as well as continue to direct MPA’s digital strategies. Since joining the MPA in 2010, Kevorkian has spearheaded an industry-wide task force that developed voluntary guidelines to drive the growth of advertising on tablets and overseen the publication of the “MPA Digital Glossary” and “Personal Mobile Devices: Tablets, E-Readers and Smartphones,” a guide for advertisers and publishers.