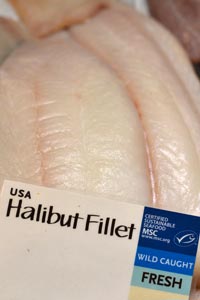 After making a splash in the industry last month by announcing that it would become the first national grocery chain to stop selling “red-rated” seafood, Whole Foods Market is making sure its customers get the message, too. In-store promotions, recipe blogging, consumer contests and a fishmonger smackdown are all lined up to call greater attention to its stricter standards.

The decision, which becomes effective on Earth Day, April 22, means the Austin, Tex.-based chain will no longer sell seafood from fisheries that have been flagged with a red rating from either the Monterey Bay Aquarium and Blue Ocean Institute, its partners. (It also relies on fishery certification from the Marine Stewardship Council.)

Such a rating means the species is either considered overfished, or caught in a way that is damaging to habitats.

Whole Foods will now offer only green and yellow rated choices, a year ahead of its initial projection, displaying the color-coding so consumers can see them. And while Whole Foods has long since stopped selling species it considers to be depleted, such as orange roughy, shark and bluefin tuna, it now will no longer sell such red-rated species as Atlantic halibut, grey sole (Atlantic), and some swordfish, as well as octopus, skate wing and sturgeon.

“This is a big deal,” Casson Trenor, senior markets campaigner for environmental watchdog Greenpeace, tells Marketing Daily. “Whole Foods has really needed to step up to the plate, and they now look to be in a position to really take leadership in the sector.”

Despite its brand positioning as a champion of sustainability, last year, Whole Foods was ranked just No. 4 on Greenpeace’s widely regarded Supermarket Scorecard, behind Safeway, Target and Wegmen’s. “Even though it had developed stronger sourcing, they kept selling unsustainable species,” he says. “Up until this announcement, they had something like 17 red-listed species.”

Still, there continues to be considerable debate about what constitutes sustainability among the experts, which adds to consumer confusion. “It is vital that retailers understand that there is no one-size-fits-all answer to seafood sustainability challenges,” a spokesperson for the National Fisheries Institute, tells Marketing Daily. “Any group that says its "red list" is the end all, be all … is a group that is likely selling snake oil along with its seafood sustainability counsel.”

Whole Foods cites United Nations data that 53% of the world’s fisheries are “fully exploited, and 32% are overexploited, depleted, or recovering from depletion.”

In addition to a contest awarding gift cards to those who comment about seafood on its blogs, the company is featuring seafood tips on its Web site, including background on sustainable fishing, and a recipe swap-out feature to replace the phased-out fish with new ones.

It’s also hosting its first-ever “Fishmonger Face-Off,” with North American team members competing for the title of the company’s top fishmonger. On June 16, the company’s 11 best fishmongers are scheduled to travel to the Aspen Food & Wine Classic, where they will demonstrate their seafood skills.