Pepsi Next Takes Over BuzzFeed 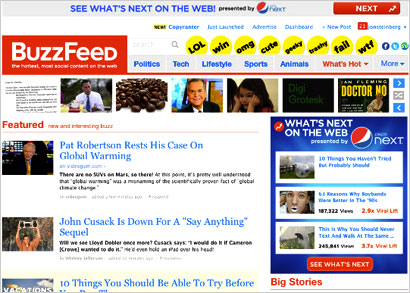 Pepsi Next took over BuzzFeed.com April 19 to promote its “Try It to Believe It” sampling-driven campaign message by engaging viral content/social media lovers.

The new cola has a branded bar on the top of each BuzzFeed page that urges: “See what’s next on the Web!,” accompanied by a “Next” button.

The first two times users click the “Next” button, they’re taken to a randomly selected story from the Internet that has gone viral.

Every third button click takes them to a piece of original content created and sponsored by Pepsi Next. The sponsored content includes articles such as “10 Things You Haven’t Tried but Probably Should” -– one of the 10 things being Pepsi Next (“a cola with 60% less sugar than regular Pepsi that still tastes great…you’ve got to try it to believe it”).

Another sponsored content offering features a demo video, starring actor/comedian Rob Riggle, for Pepsi Next’s Facebook-based “Internet taste test” contest. (In that contest, some entrants will be selected to be included in videos featuring FunnyorDie.com entertainers creating improvised impersonations of brand fans based on their Facebook profiles.)

The concept behind the Pepsi Next BuzzFeed campaign is to convey the need to try Pepsi Next within the context of encouraging BuzzFeed users to “try” discovering new viral content that they might not otherwise have spotted.

The sponsored content pages include areas showing the activity on Pepsi Next’s Facebook and Twitter accounts, as well as the sharing buttons for various social media sites that are standard on BuzzFeed content pages.

In addition to the top-of-page bar/Next button unit, Pepsi Next also has a one-day home-page “multi-story” unit that features two viral stories from the Internet and one Pepsi Next original content piece (which change periodically). The “Next” button at the bottom of this unit takes users into Pepsi Next’s Facebook page, which is featuring a promotion for the “Internet Taste Test” and actual sampling events being held in 800 Walmart supercenters in 40 cities.

While the bar/button and multi-story ad units are for one day only, Pepsi Next’s sponsored content pieces began appearing in BuzzFeed’s “branded content” format (sponsored stories are interspersed amid other “featured” content, but set off by a colored background and a “featured partner” posting ID), according to Jon Steinberg, president of BuzzFeed. Typically, a content sponsorship runs for about a month, during which time new content pieces are regularly posted, he says.

Pepsi Next is the first BuzzFeed sponsor to use a top-of-page bar unit.

It’s also just the second to be allowed to do a takeover. The first was a day-long takeover to promote Viacom’s “Beavis & Butthead” show, in which the incorrigible animated characters “marked-up” the site (changing its name to “ButtFeed” and its “featured” content to “featurd” content) and offered their own content, such as advice from the elderly on “how to score.”

“All of our sponsorships have to fit with our brand -- meaning make sense within the viral/ buzz context,” says Steinberg.