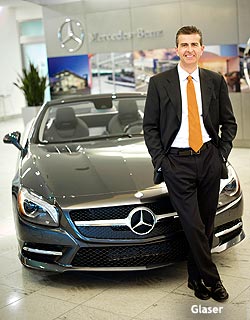 Bernhard (Bernie) Glaser, who replaced Steve Canon as VP marketing at Mercedes-Benz USA (MBUSA), was pretty much up to speed at the get-go when he started in the top marketing role early this year. He had, after all, worked closely with Cannon (who in January was promoted to president and CEO of MBUSA) for five years as general manager of product management at the Montvale, N.J.-based U.S. division of the Stuttgart, Germany, automaker.

But there is a lot on his plate as MBUSA has a number of product launches this year and next, including a return to the compact segment, a venture that will exert a lot of influence over the brand's viability for years to come. Glaser -- who began his career in 1992 with Mercedes-Benz in Germany, first in strategic product planning and later as worldwide product manager for the E-Class -- talks with Marketing Daily about the new job and the tasks at hand.

Q: What's the major difference between your job now and before the promotion?

A: I was reporting to Steve before as general manager of product management. So as I step into his role, I basically still oversee my function while taking on the entire market communications, plus market research and the brand-event side.

Q: How challenging is this transition?

A: At MBUSA we have the mantra that we are all marketers, whether you are in PR, marketing communications, or product planning. So when we have agency briefings we are all sitting together on creative reviews and everyone brings his input. I was part of it from the product side, so I knew all of our key contacts and partners at the agency before now.

Q: Do you bring a markedly different style?

A: Everyone does. I have my own style. But I also bring to the plate a broad experience, and deep product knowledge. I know the entire design process, and pricing discussions that go along with it. I have great relations with Stuttgart, and obviously that's where I'm coming from, so I know all the key players there as well. So for me, it's easy to make the switch.

Q: Coming from product, are you more inclined to focus more on vehicles in advertising than on the larger brand?

A: The best thing is to explain with the creative we just did, and which I was involved in under Steve. And also something we are working on right now. First, the SL launch: Nobody else can make something like an SL; it's the sixth generation of a vehicle that is an icon of the industry. So we focused on the car but it's also a brand spot. Now this year we have to launch the GL, our full-size SUV. So you will see campaigns that bring the benefits of such a vehicle to life. It will speak to the space the vehicle offers, for example. It's going to be much more feature-related. Finally, we will treat [Mercedes-Benz's cloud-based telematics system] mBrace like a product launch as well, since it's a feature that allows our customers who are attached to their smartphones to continue their digital lives inside the car.

Q: Since it's a large SUV, will the potential market for the GL be impinged on by gasoline prices?

A: The short answer is yes, which is why we improved [its mileage.] But if you look at fuel price development, $4 gas prices no longer seem to shock a consumer any more. And there are big families in this country who need that extra space. They need big cars. As a manufacturer, our obligation is to produce these cars for our customers, but at the same time make them more fuel-efficient. So the GL is slightly bigger, with more room inside, but the direct injection engine has smaller displacement and 18% better fuel economy versus the outgoing model. And we have a diesel alternative also.

Q: When you look at market research, what is consumer perception of the brand now?

A: Some of the numbers we are looking at versus our competitors involve loyalty. For six years straight, we have the highest brand loyalty among our competitors. In the fourth quarter alone last year, we had 64% in loyalty, the highest we have ever had. So that's one thing. Another point is our conquest defection ratio -- how many consumers do we conquest [against a competitor] versus how many they conquest against us. If the ratio is larger than one, we are gaining more customers "from" than losing "to" a given brand. We have positive conquest/defection ratio against all of our core competitors: We have increased our C/D ratio against Lexus over the last four years, and finished with a C/D ratio of 3.12 for 2011. We have also increased our C/D ratio against BMW over the last three years, and finished at 1.37 in 2011. Against Audi, we have increased over the past 2 years, and finished with a positive C/D ratio against Audi for the first time since 2007.

Q: To what do you attribute this?

A: I think it speaks to the momentum of the brand. We have five new cars we launched last year, and that created huge momentum for us. We came out of the crisis really strong and haven't let off the throttle since. We will launch nine new models in the next three years. So this year alone we launch the SL on May 2; the GL in September; and the GLK [compact SUV] facelift mid August.  And we have big plans for next year, too, including a new generation of compact cars.

Q: Specific to that smaller car, Mercedes-Benz has had some unpleasant experiences with the sport coupe in 2005, the hatchback. Aren't you wary about bringing a small car to market again?

A: Forget everything you have in your head about the hatchback. This new generation of cars is absolutely, emotionally brand commensurate. We put our best foot forward for the model that will hit in the fall next year. It will be a very sporty, dynamically styled four-door sports coupe. Size-wise it will be almost the size of today's C Class -- a couple of inches shorter -- so it's nothing you'd associate with "compact."

Q: Is there a danger in thinking too much about appealing to a younger buyer if you are a luxury brand?

A: We see that as a big opportunity because if you just consider what's happening in demographic shift in the U.S., one of our core groups --the Boomers -- are aging, so the next generation, the 75 million Millennials, are now moving into their prime buying years for cars. If you stay static in product offerings, you become irrelevant to these new generational shifts. With this new generation of cars, we are creating a new gateway to the brand. Right now, the gateway to the brand is the C Coupe, and we have one of the highest conquest rates with that car. The GLK, our gateway vehicle for the SUV segment, has one of our highest conquest rates as well.

We promise a Mercedes, we build a Mercedes. But trust me, we will balance [the new smaller car] with what we do on the top end. We will bring a new S Class next year as well. And we have the CL Coupe coming as well. So we will have the widest range that balances any concerns about the brand.