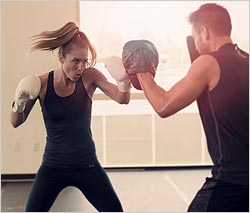 In its ongoing attempt to win over women at every step of their fitness journey, Under Armour is introducing a goal-setting Web site called “What’s Beautiful.” Involving Twitter and Facebook, the site is “a competition to redefine the female athlete,” with an end result of three new “faces” for Under Armour, as well as seven brand ambassadors.

It’s also an opportunity for the brand to max its ROI on social media, while building a closer relationship with its core customer, Adrienne Lofton-Shaw, senior director of women's marketing for Under Armour, tells Marketing Daily. “What we get really frustrated with is advertisers who talk about beauty in terms of how you look, not what you are made of,” she says. “So this site, which allows women to enter any kind of fitness goal, whether it’s competing in the Ironman or running your first mile, is about tenacity, and never quitting.”

Enlisting people’s social networks is a logical way to get support, she says. “Every powerful woman’s brand starts with hearts and emotion, so we designed this contest in a way that uses her social community to help her.”

Through the site, women declare a goal, and then post proof of their progress with videos, photos and diary entries. In addition, users will get 15 Under Armour Missions, as well as motivational content from guest trainers, UA’s athletes (including the likes of skier Lindsey Vonn and sprinter Natasha Hastings), gear giveaways and updates on other competitors.

Ads, running online, push the idea of redefinition, and women themselves deciding what makes them athletic and beautiful. “We’re taking it back,” the voiceover explains, “from the marketers who want us to look Photoshopped, from the jocks who want us topless, from the people who think we should be happy just the way we are. How will you take it back?”

Both 30- and 45-second spots are scheduled for Under Armour Women’s social media channels, as well as BlogHer Network, DailyCandy, Glam Media, Pop-Sugar and Stack.

The idea, she says, is that the brand has something to offer the inner athlete in every woman, whether it’s someone who wants to lose enough weight to have a baby, or a hardcore boxer looking to rehab an injury so she can get back in the ring.

Ultimately, she says, she’ll be pleased if just 1,0000 women complete the challenge. “The average woman has 235 Facebook friends, so if just 1,000 finish, we’ll have reached 235,000 people, many of whom won’t just be reading, but will actively encourage the woman.

Of those who complete the challenge, Under Armour will choose 10, with three ultimately being christened as the new faces of Under Armour. The three will win a nutritionist for a year, as well as sessions with celebrity trainers and ample Under Armour swag. “We’ll use them in all our marketing channels,” she says, “even potentially in TV advertising.”