Q&A: Mitsubishi Gets Outlandish For Outlander 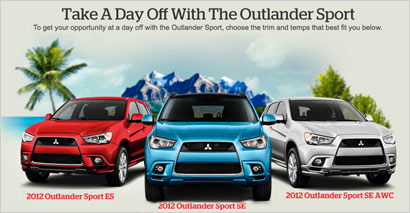 A few years ago, Mitsubishi Motors North America (MMNA) slipped off the sheer face of the U.S. auto market and seemed doomed to plummet into the same gorge Isuzu vanished into. But the carabiners, ropes and chalks held, and now the Cypress, Calif. U.S. sales arm of the Japanese automaker is clawing its way back into contention.

The rock-climbing metaphor is appropriate because the automaker has taken to life-threatening outdoor adventures, and extreme marketing creative to tout the bona fides of its Outlander Sport SUV. Mitsubishi and its AOR 180LA have thrown caution to the winds with documentary-style media campaigns like "Death Road," an attempt to prove out Outlander's off-road abilities by driving the most dangerous road on Earth; "World Records," where the automaker took to a frozen lake in Canada to break five Guinness Book ice driving records in 24 hours; and "Storm Riders," where Mitz followed a storm from Los Angeles to the mountains and plains. And for the company's electric car, the Mitsubishi i, there was an electric-car takeover of Normal, Ill., where the automaker has a production facility. The car is now being sold in 13 states.

Last month the automaker had 1,634 sales of the Outlander Sport, the largest number in a single month since the model was introduced in October 2010. The number marks a 17.3% increase versus last March and a 10.1% increase year-to-date. Sales of the automaker's Lancer Evolution increased 46.4% versus the same month a year ago, and are up 38% for the year.

The latest promotional effort gives three people all-day test drives of the Outlander Sport, while MMNA covers for them at work by sending ersatz temps to the winners' cubicles. The catch is that the temps are an odd lot of unqualified folks: an opera singer, rocket scientist, and meteorologist, for example. Francine Harsini, director of advertising at MMNA (with an assist from Grant Holland, creative director at 180LA), talks about the new campaign with Marketing Daily.

Q: Since this is a test-drive-focused campaign, is Mitsubishi making the media buy tier two, dealer-group buys?

A: No, the focus for this campaign is tier one. The Mitsubishi brand has always been about "doing" and "proving" in the real world, not just "saying" and "selling" in a marketing world. And this campaign is another example of that. From "Live Drive" to "World Records" to "Death Road" to "Normal" to "Storm Riders," our tone and character challenge convention in order to prove that it has a place alongside all the other brands.

Q: So are these temp actors -- or are they actually what you say they are?

A: They really are meteorologists and rocket scientists and they will show up to the office. We will work with the respective companies beforehand to get clearance.

Q: Will there be a social media element to this around the temps, and what they do at the office?

A: We will film both the driver on his day off, as well as the temp replacement filling in for him at work. We expect these films to go viral and we will support them with a significant social media push as well as another ad buy (which includes TV), encouraging people to go online to see the results. All the assets we collect will be used to drive social media conversations.

Q: I'm also kind of wondering about the genesis of this idea.

A: The idea is -- to truly appreciate the Outlander Sport, you need to spend more time with it than a standard 10-minute test drive. To truly appreciate everything it has to offer, to get past pre-conceived notions, you need to spend a full day off with it. But who has a full day to spend on a test drive? What if Mitsubishi helped make it happen by hiring some fun, temporary replacements to fill in for you at work or whatever you need to get out of? That way you're covered while you get a chance to enjoy the ride.

Q: So, Grant, why do something like this instead of doing more traditional product-focused ads, or test drive?

Q: What's the return on this?

A: We hope to prove that once people spend a significant amount of time with the Outlander Sport, they'll appreciate how much it has to offer and why they should add Mitsubishi to their consideration list. We also want to get people to reconsider the traditional test drive. Purchasing a car is a big decision. Get to know your car before you buy it.