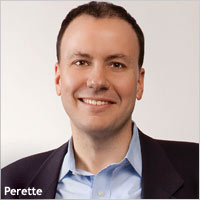 Discovery Communications is touting its own online video and mobile initiatives during upfront season. Leading that effort is Jean-Briac (JB) Perrette, who joined Discovery last fall as chief digital officer from NBC Universal, where he headed digital and affiliate distribution.

Discovery has steadily expanded its online presence over the years, from homegrown companion sites such as Discovery.com and TLC.com to acquisitions like Petfinder.com, TreeHugger.com and HowStuffWorks.com, to iPad and other apps for its core brands. The aim is to lure marketers with a 360-degree media experience for their ad dollars.

“We want to take the range of sites and products in our portfolio -- roughly at 24 million uniques overall--and make it work for advertisers,” said Perrette in a recent interview. A particular focus is continuing to build up its online video inventory. With video streaming on its owned-and-operated Web properties up 70% in 2011, Discovery wants to capitalize on the growing demand for its online programming.

A foundation for extending TV shows to the Web has been its “after-shows” for popular series like “Mythbusters” “American Chopper” and “Gold Rush,” in which show participants discuss the most recently aired episode each week.

In the case of "Gold Rush," Discovery in December aired a one-hour version of re-edited aftershows for the program that became the highest-rated show among men on the Friday before New Year’s Day, according to Perrette. “It was a cool sort of integration," he said. Discovery wants to create similar Web extensions and integrations for more of its shows.

In that vein, TLC’s new competition series “Craft Wars,” produced and hosted by Tori Spelling, will include a series of after-shows in which she gives her take on the latest episode and tries her hand at some of the tasks that contestants face.

Beyond the desktop screen, Discovery is also trying to tap into the two-screen viewing phenomenon, using tablets while watching TV. Last year, it debuted apps for the iPad and iPhone dedicated to its long-running “Shark Week” franchise. This summer, it will launch an updated version of the app that lets people interact with added content and features including a live “Shark Cam.”

Likewise, TLC plans to introduce a new social TV app later this year to foster co-viewing on mobile devices. Perrette said Discovery wants to focus on creating its own two-screen products rather than relying on various social TV vendors, like Viggle, Shazam or Miso. “We’re trying to simplify all that and have it on a native TLC experience and make it seamless from a consumer standpoint,” said Perrette.

Overall, about 15% of Discovery's digital content is now consumed through a mobile device, with mobile page views tripling in 2011. Perrette promises that more is on the way. “We’re only scratching the surface of fully mobile-enabling all of our brands,” he said. The company is still creating the technical and sales infrastructure to monetize its mobile usage.

“We’ll have more ability to offer rich media across our mobile sites by this summer,” said Perrette. Digital still makes up about only 2% of Discovery Communications' total ad sales. The company is quick to note, however, that digital is the fastest-growing segment of sales, increasing 40% last year.

New data from the Interactive Advertising Bureau showed that online ad spending overall grew 22% to $31.7 billion last year, with mobile and online video among the fastest-growing areas -- at 149% and 29%, respectively. Together, they accounted for almost 11% of overall online ad dollars in 2011. The $31.7 billion total edged out IAB's estimate of $31 billion in cable TV ad spending last year.