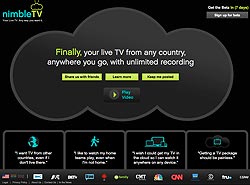 With the backing of some prominent media venture capital firms, NimbleTV is looking to start as a subscription TV service. It intends to bring all cable, satellite, and telco-delivered networks to any device.

Greycroft Partners and Tribeca Venture Partners are investors, as well as media firm Tribune Co., which Nimble contends is not a competitor and working within the law.

NimbleTV is based on a simple idea: "Customers should be able to access the TV they pay for wherever they happen to be," said Anand Subramanian, CEO of NimbleTV.

Nimble, a cloud-based service, is looking to speed up the slow-moving process of making all TV networks available digitally. Company executives are pushing cable TV and other operators efforts for "TV Everywhere" -- allowing their consumers to access all their traditional TV channels from a digital video device.

Under its plan, consumers still pay their cable, satellite or telco subscribers. There is is a fee to Nimble, according to The New York Times, of around $20 for set-up and management services. Nimble says it merely acts as a "payment service."

Subramanian says his Nimble complies with all laws about the distribution of TV networks, stating: “Today, the groundbreaking technology behind our service makes ‘TV everywhere’ a reality -- with more options, high-quality viewing on any device, watchable from anywhere.”

NimbleTV will begin by running a test run in New York City, limited to 26 networks. Nimble says no box or equipment is needed for its service.